The first two days were dedicated to learning the new software (VPT8) that we'll have to use for the project. The software itself is pretty intuitive, therefore very easy to use. We could explore its capabilities very quickly with a projector. 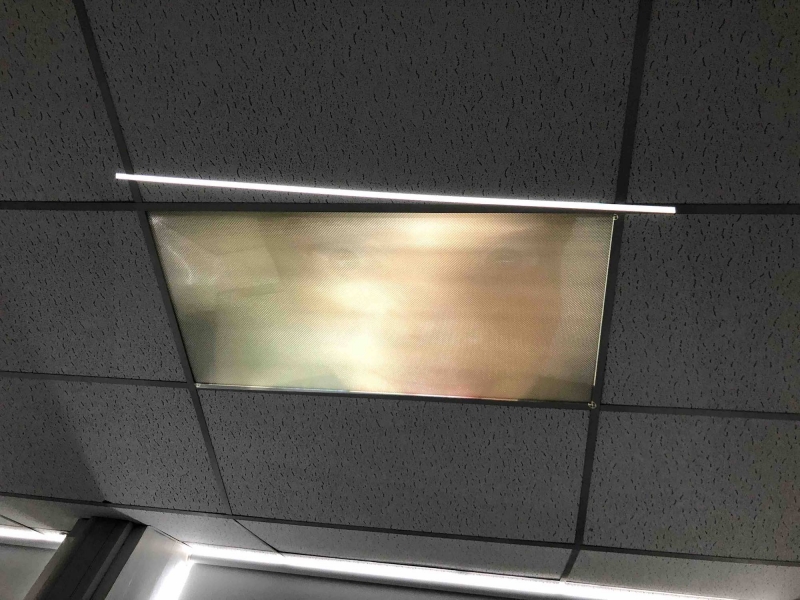 We first tried as a group to map a ceiling light panel and then later in the afternoon some bricks and other random surfaces. 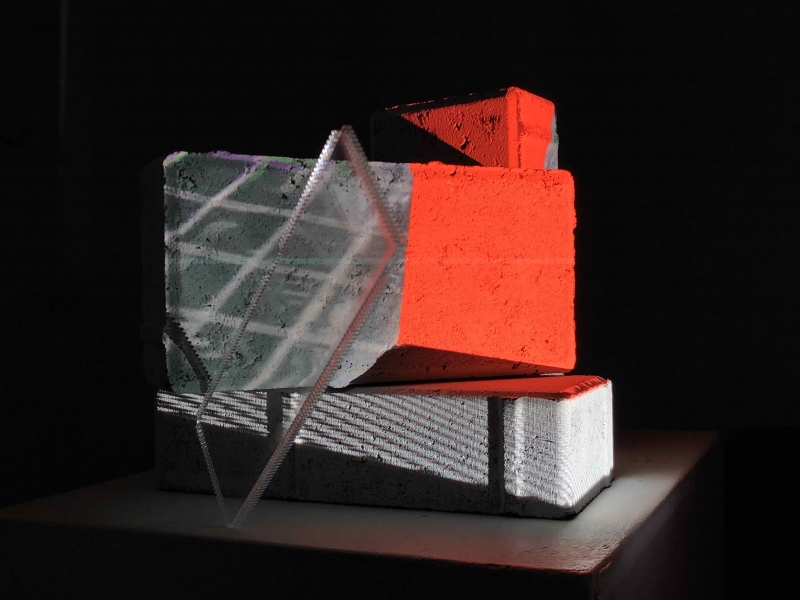 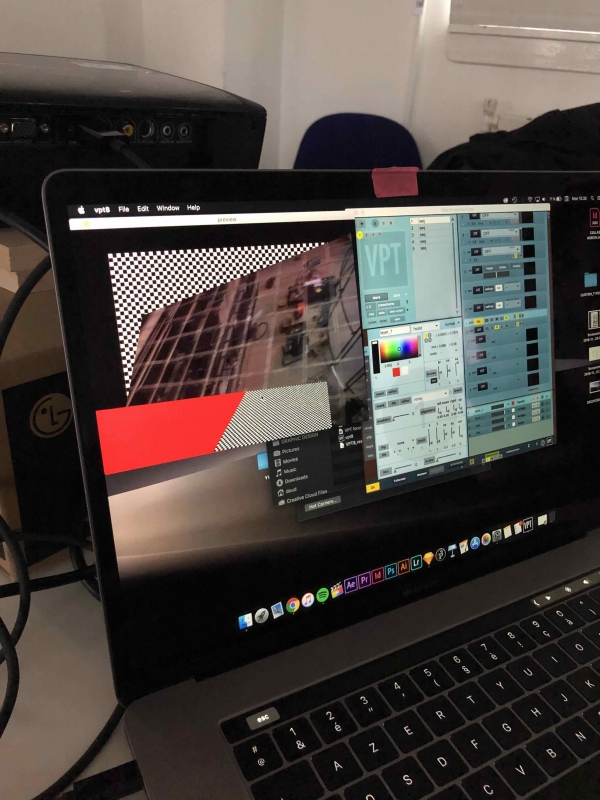 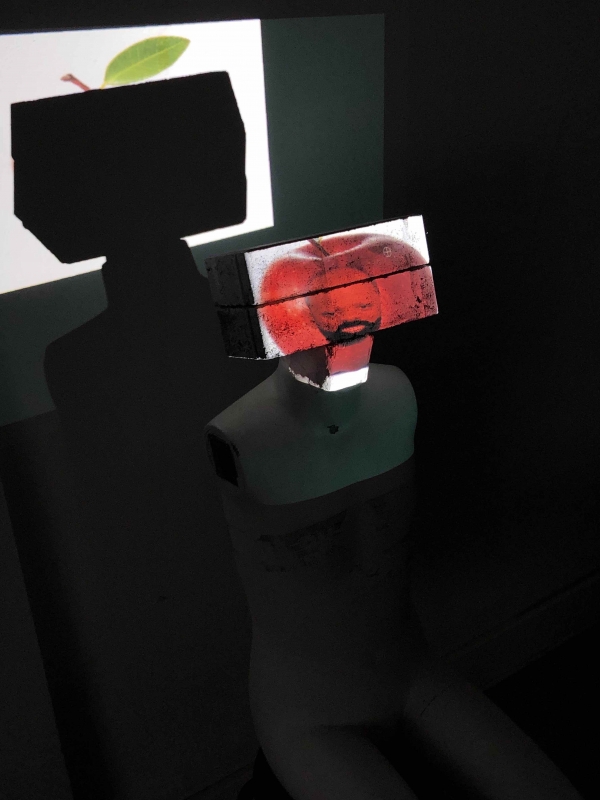 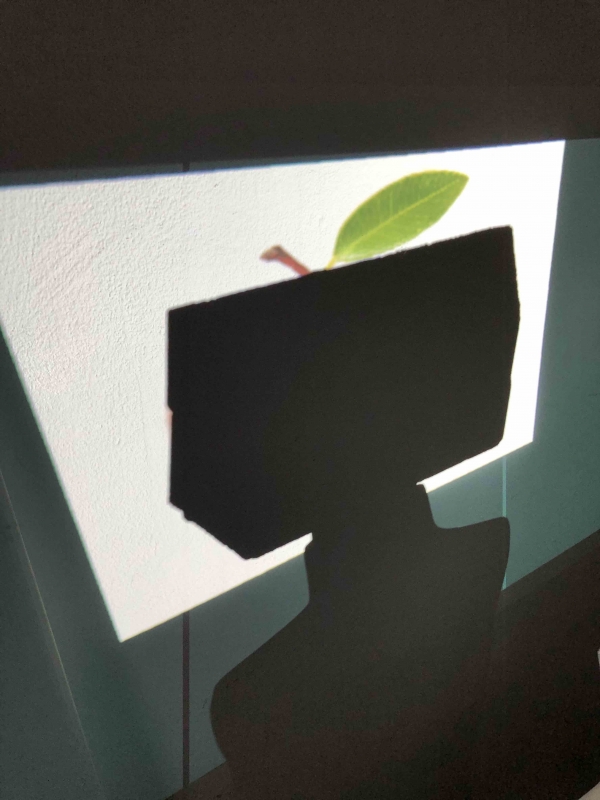 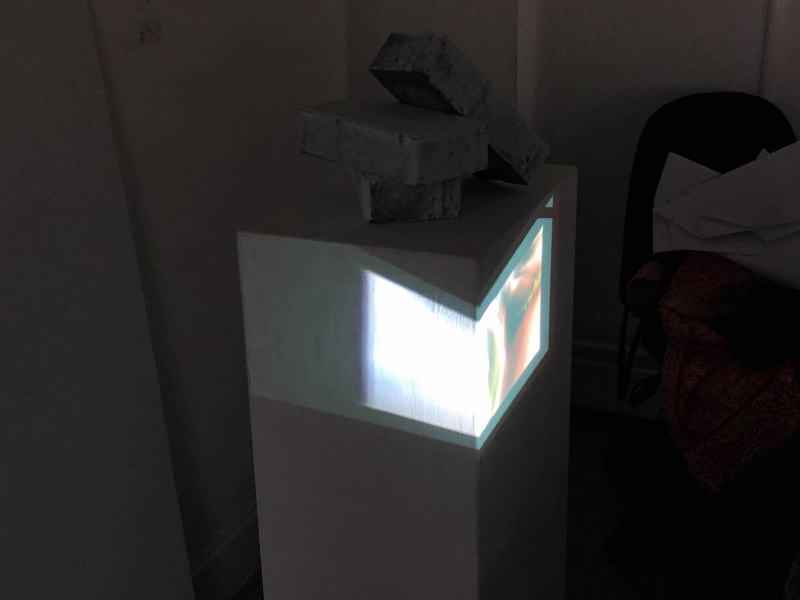 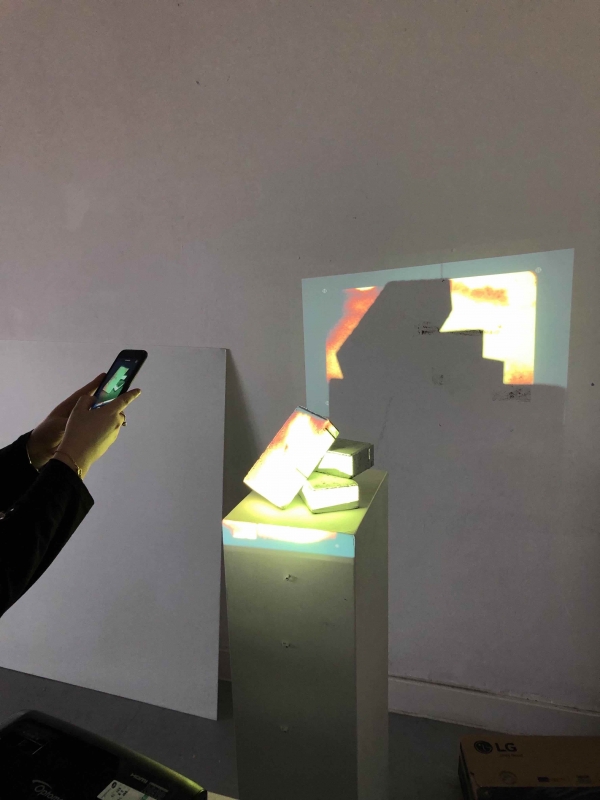 We later learned how to use the LFO function and syphon in order to project a processing sketch.

As the project was only a week long I had to come up with an idea pretty fast.
During our trial period, I really enjoyed the texture of the ceiling's light panels. Their diffuse texture gave the projection a really nice look and it behaved just like a light.

As we discussed some reference during the project launch I remembered James Turrel's work on light. I found it very intriguing and interesting. I really enjoyed how he managed to transform the use of light into an expressive piece of lighting. (his work often features lit-surfaces of a room, a wall, ceiling, cube etc).

At that time of the year, the natural light time is reduced due to the position of the sun. That's something that really hit me compared to France. (also the weather conditions in Glasgow tends to reduce the light color spectrum to the blue area). I kinda wanted to work on something light-based within a space that could maybe evoke my home-country.
Basically, my idea was to evoke a space I knew from my memories but from only through lighting.

I started to create different assets that would help to create a light condition that evokes me my time in France last summer. I created a looping gradient based on a precise color scheme from multiple pictures I took last summer. 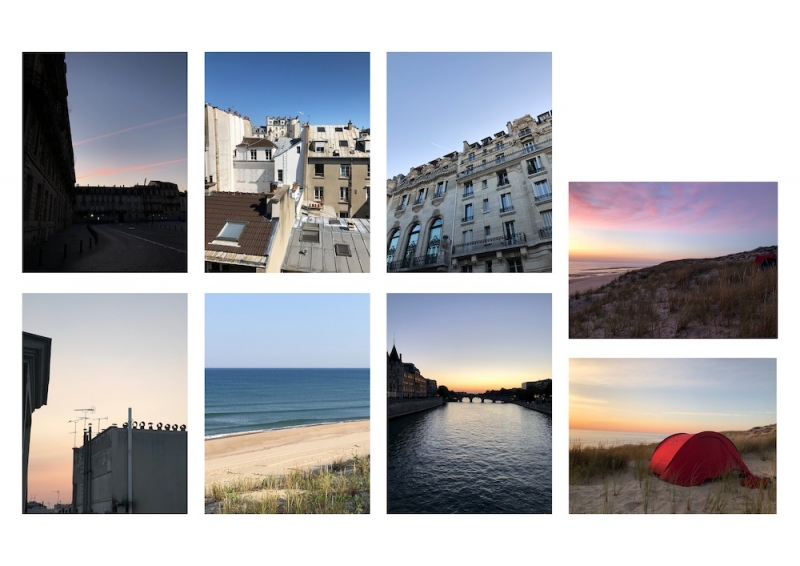 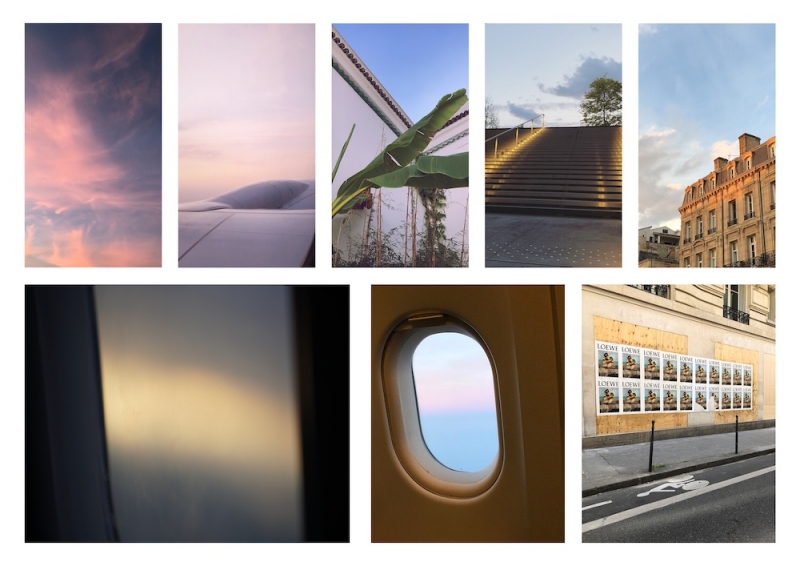 Here's the gradient based on the colors of the pictures showed above :

As I was creating the gradient I explored a different type of shape gradients. I ended up with a colored rectangular shape slowly evolving and a linear gradient 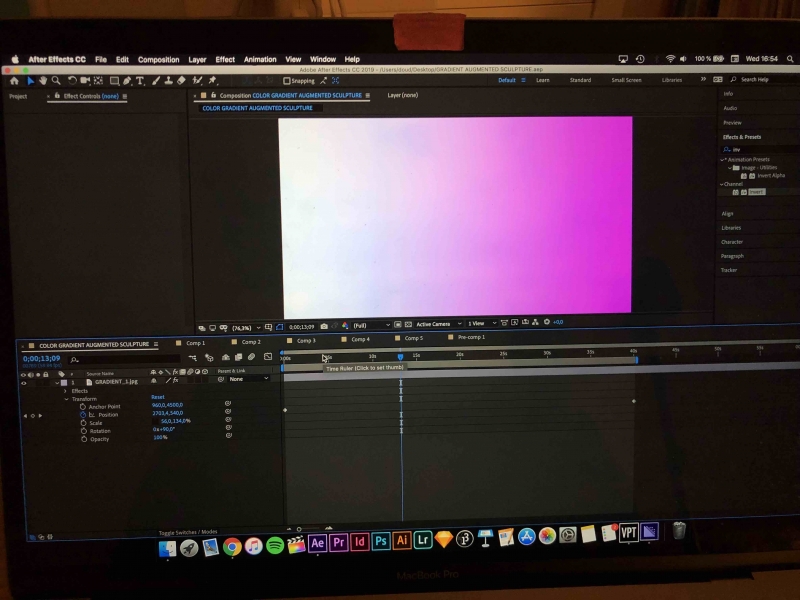 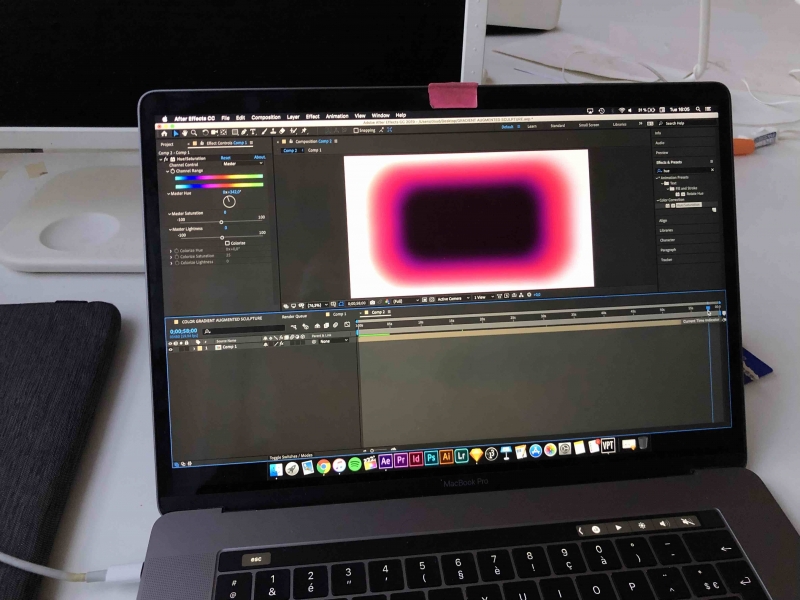 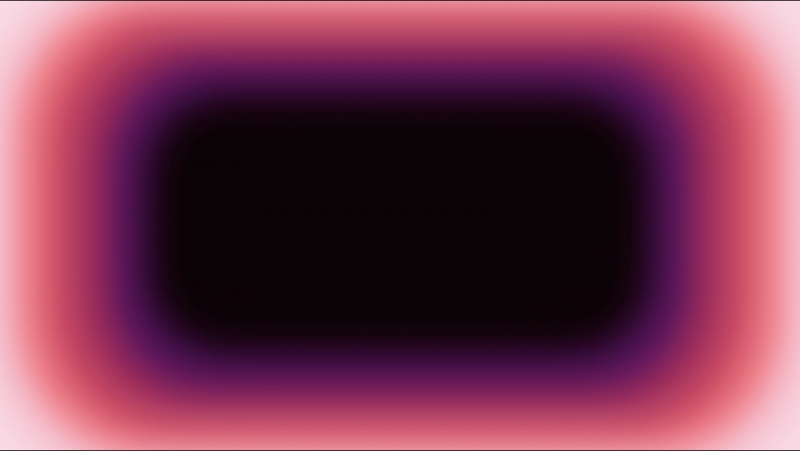 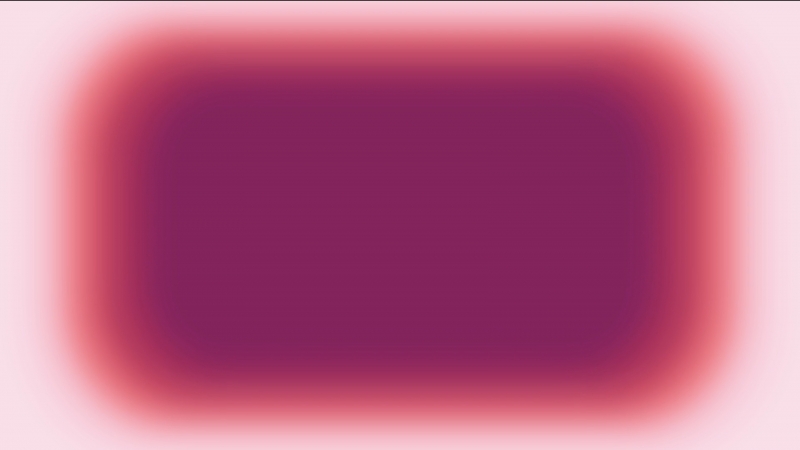 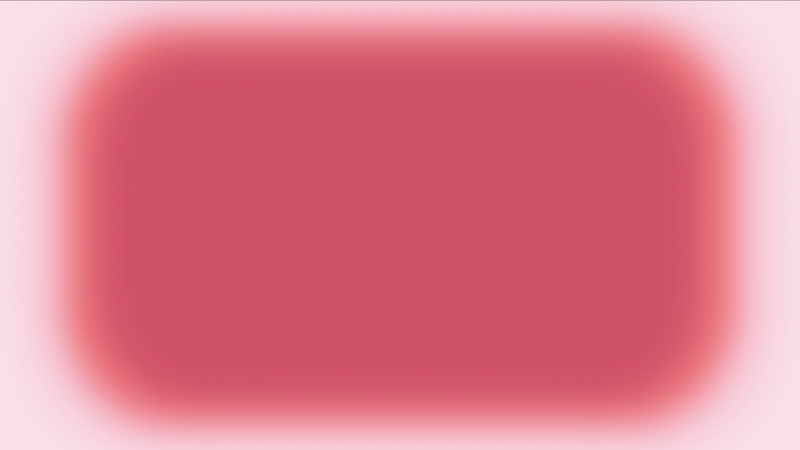 I took advantage of the daylight to finish these different types of gradient and waited for the sun to set so I could start running some test on the ceiling.

Once the studio was dark enough I started setting up a little space where I could install the projector and point it at the right location. And eventually, I could start projecting the gradients I created earlier.

Here is the set up of the projection : 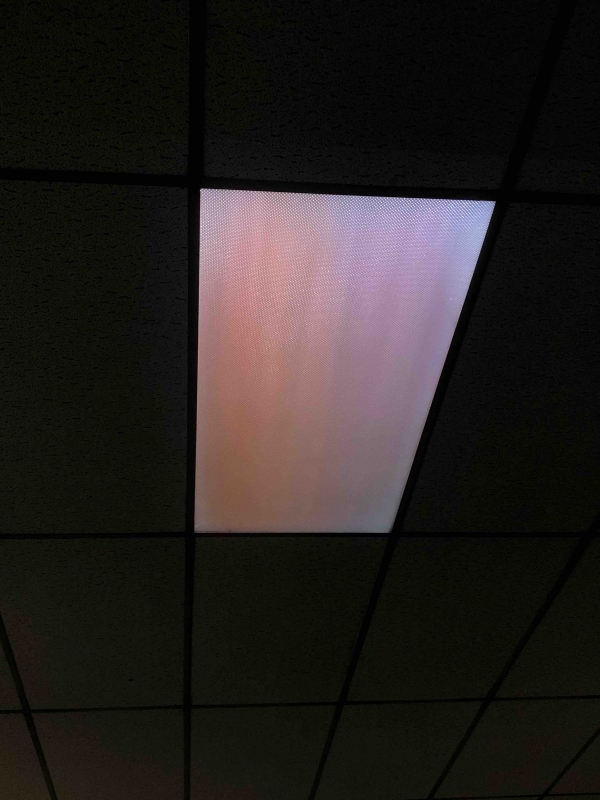 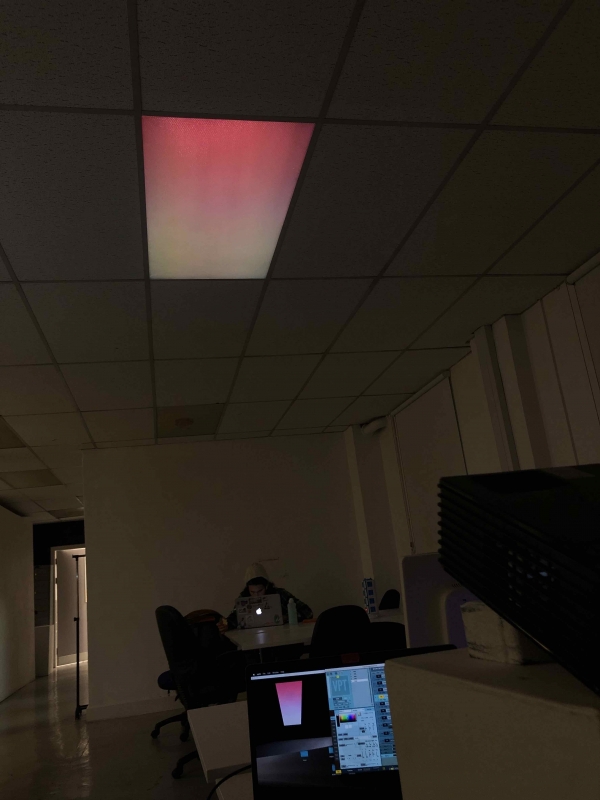 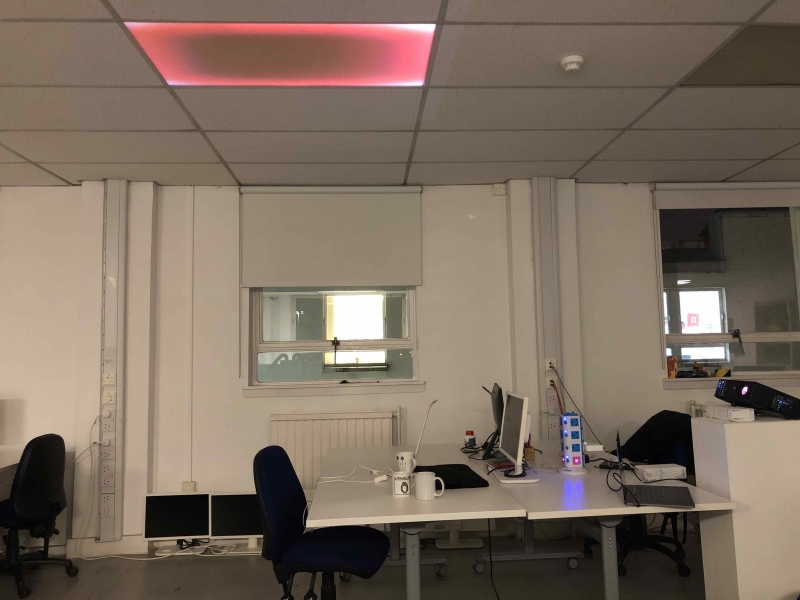 Here are the two gradient projection :

I think it worked pretty well, I really liked the texture of the light, very soft and not too aggressive. It's hard to see in the picture as there was still too much light pollution but it really reminded me of the time I wanted to evoke through this colored lighting.

As I finished recording my footage for the assignment I headed back home and had an idea.

As I do a lot of graphic design* aside from my studies at GSA, I decorated my room with some flyers with interesting & beautiful graphic design concepts. I thought it would be a great opportunity for me sort of cross the two disciplines (graphic & interaction design) and make something out of it.

* (I have a graphic design Instagram account that I run with two of my friends. We challenge ourselves to create a poster every day)

Graphic design is about communicating and expressing emotions through illustrations, types, layouts etc, but in most of the case, these designs don't move. So I wanted to give these flyer a new perspective and add an unpredictable touch to them by using lights projection. I wanted to create a new approach of looking at graphic design. I thought it would be nice if I could highlight my passion for graphic design with light projections.

The idea has a more pragmatic approach than the first one, but since I finished it early I pushed the boundaries of the project and added a "fun" and less relevant addition to the assignment. 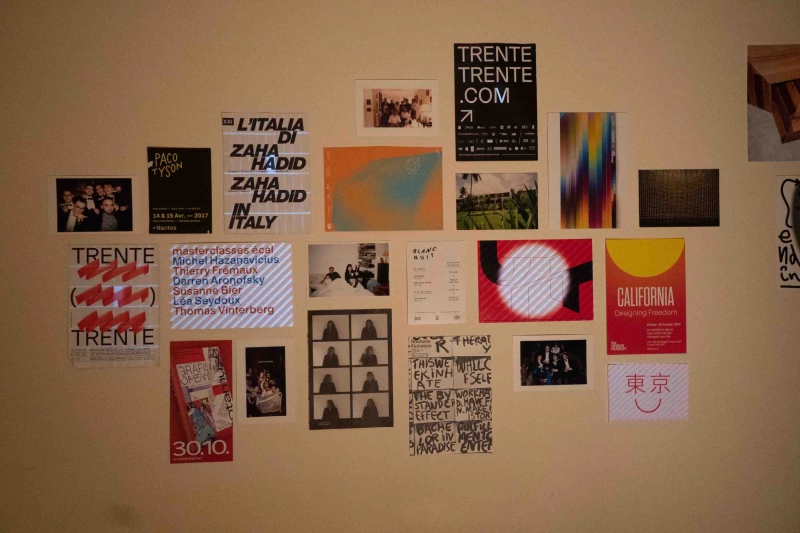 As I didn't have a lot of time for this project I couldn't really create content for each flyer so I re-used my gradients and projected them onto the flyer. I tried them on different types and colors and the results were really interesting. It created a flyer-focused space, which is interesting to look at because there's no distraction. You can really focus on the content and the animation. 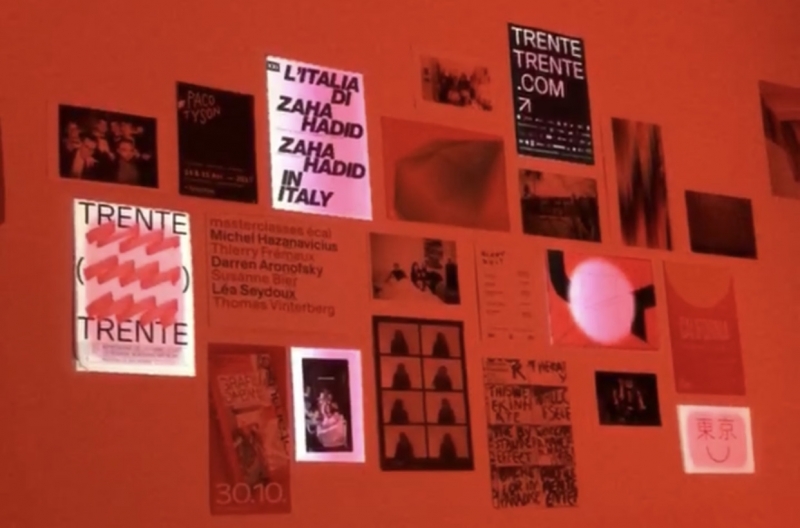 Here's a time-lapse video of the mapping process :

and a time-lapse of the final result with the animations running :

On Wednesday I was kind of frustrated to only have re-used my gradients, so I created two more animations. A grid where parts of it randomly light ups and a zebra animation.
I also created different variants of my gradients to add a bit more diversity to my projections. 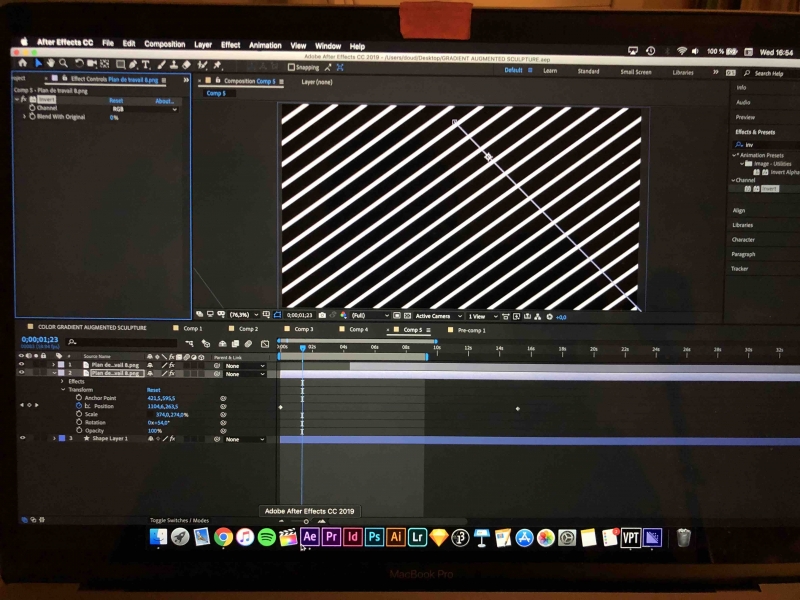 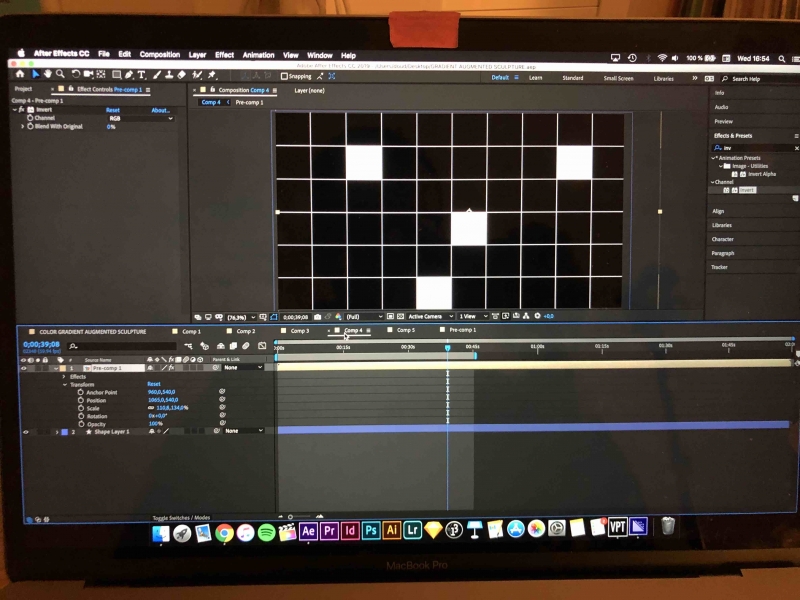 I waited for the sun to set and immediately started to project it. I wanted to mix the gradient with my two new animations but VPT didn't quite like that. It crashed every single time I started to add the grid animation. I think it doesn't handle too much video channels.

So I only projected the grid and zebra animation together. 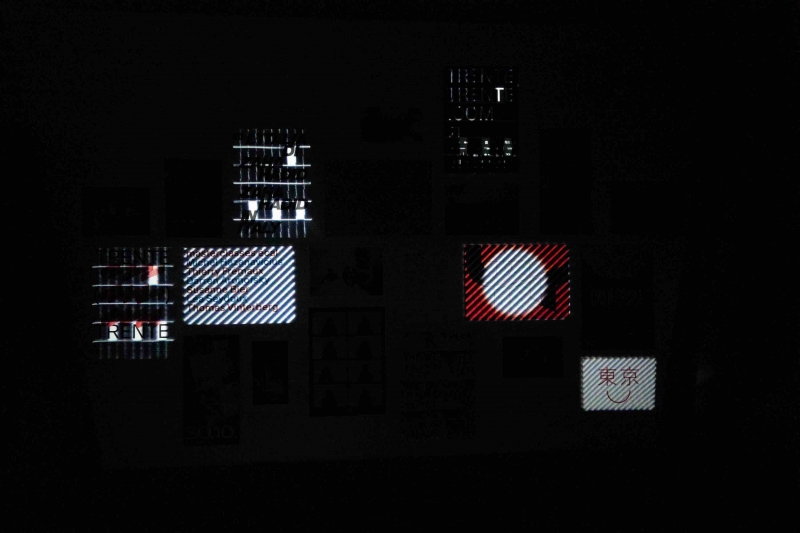 I really liked the outcome as it doesn't alternate the color this time, it just reveals only some parts of the designs. You have just the right amount of time to see the details of the flyer.

During previous projections, I gathered some footage for my documentation but I wasn't really happy with it so I set up my projection again in order to record footage for the video I had to make for the assignment.

Here are some stills of my documenting process : 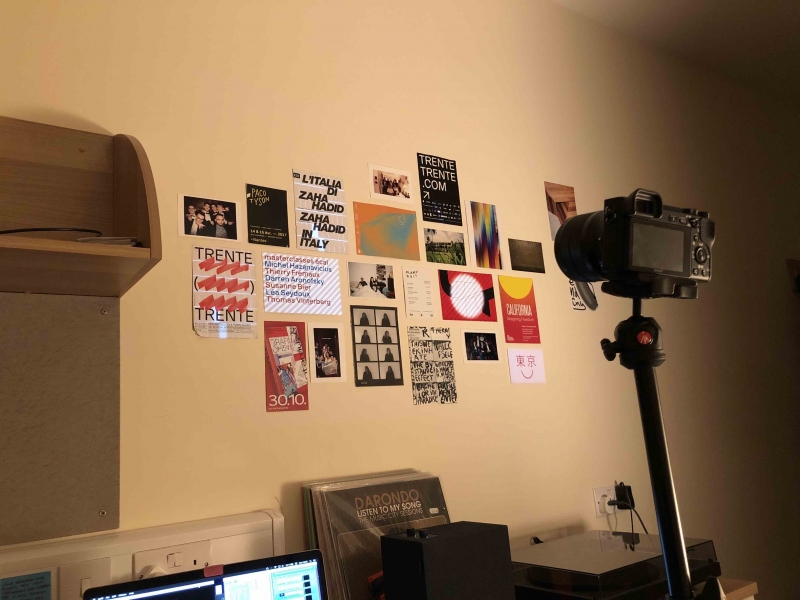 Later in the night I imported all my footage into Premiere Pro and started the edit.

Only problem I encountered was VPT8 stability, I tried to run different animation at the same time but it simply crashed. I wasn't a problem for the light project but for the poster projection it reduced a lot my intentions.

Here's the final video made for the assignement :

I think both ideas were reflecting my current state of mind at the time of the project. At the time I really missed my friends and family and kept thinking about the great times I had during the summer. The lack of light in Glasgow during winter/autumn inspired me to do something around it. James Turrel also inspired me in the way he sets up his work (light projection on walls or ceilings etc).
I created this projection piece as a memory trigger. It was important for me at the time to express my feelings and thus create something that evokes me this nostalgy.

For the flyer projection, it's more like a fun addition to the project as I had spare time. I just pushed the boundaries of the brief and created a second projection mapping piece. It was indeed less well-thought and more fun piece.

I guess the only improvement I could have made would be in a setup perspective. I think the studio is a great space to experiment with things but not the best to really set up real installations. A dedicated space would have been perfect to reshoot the video and make it look less 'amateur'.

I really enjoyed the project. I always wanted to work on projections and light, it was the perfect opportunity. I loved the simple approach of the brief. It let me create something I really wanted to do and express myself during this hard period.

As notified in my assignment feedback I added some information about my process of research and thinking for this project on my learning journal.
Part of the update is a re-structuration of my LJ post + more details about the idea, the process, and my reflection.