Data Visualisation is a two project focus on how to decode and re-encode visually some data through various processes using computational methods.

We launched the project and looked at a lot of different works and references on Data vis, it was very interesting and great to have such a big overview of what we could potentially do for this project.

Looking at these references I really liked the kind of old school data visualisation, like the ones from Edward Tufte which are looking old and very abstract almost like art.

Over the week we had different workshops, mostly on Processing, where we looked at how we can load and use big chunks of data into processing, how can we manipulate it, and finally export the outcomes in big PDFs to potentially print it.

After the multiples workshop, I started to think about: which data I want to use and how do I want to put it visually.

This year, 'm challenging myself to tie some projects a lot more with graphic design, as I focused a lot on sculptural and electronics last year, so the obvious output for this project was to make a poster.

On top of this, I didn't want to fall into the very classic data vis with pie charts, etc, I wanted to explore maybe an abstract way to "re-encode" data. And additionally, I wanted to use some meaningful data, at least to me. I guess making an abstract data visualization about covid-19 deaths for example wouldn't make sense.

I spent most part of the week trying to find different data I could retrieve from my life. I found my Spotify's listening data, my iPhone Health app data, pictures GPS locations, etc etc. And I thought it could be very interesting to use my pictures as a form of data, although I didn't really know how I could use them and what kind of tangible data I could get from them. I kept this idea in the back of my mind and continued to explore different things.

I started to gather some visual inspirations on Padlet which you can see down below. I liked the strong approach with bold colors and font and thought it could be a very interesting approach. Aside from the strong visuals inspirations, I've read snippets of Per Mollerup's Data Design and found the whole subway map systems topics really interesting. 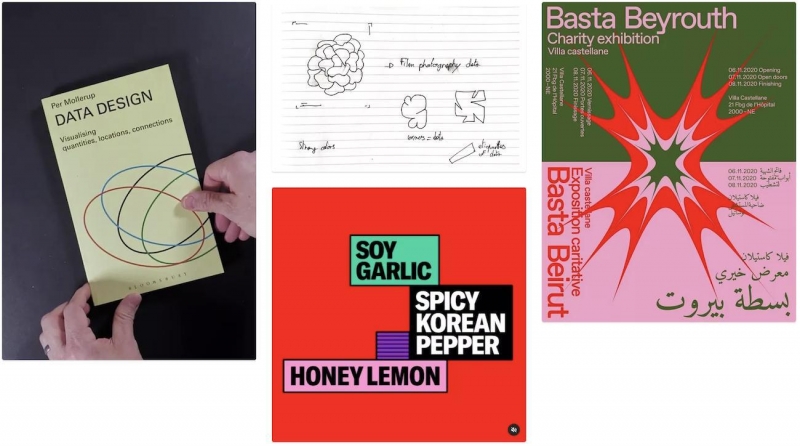 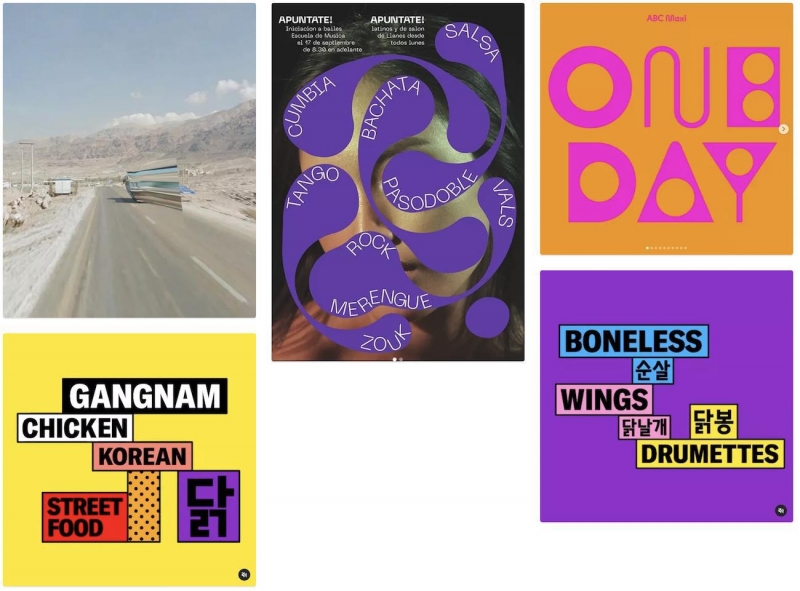 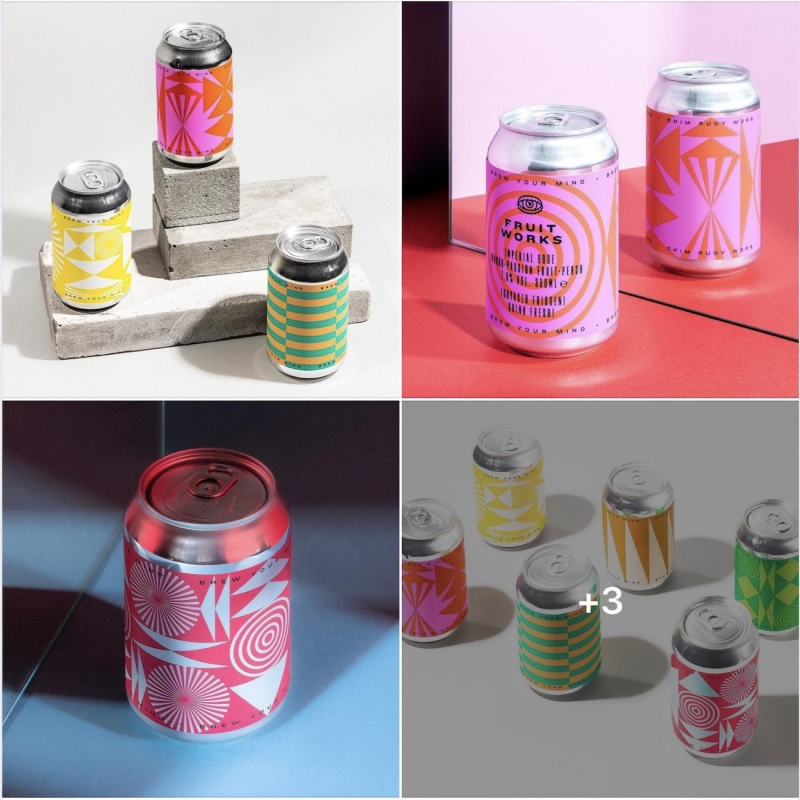 In fact, that's maybe one of the most used data-vis in the world, and it's practically the same everywhere. It also reminded me of the game "Mini-Metro", where you draw the metro lines almost like the map, without worrying about anything else..

At the end of the week, I had a tutorial with Paul. The same day I received the data I've requested from Spotify and had a quick look before the call.

I explained what was my idea for the output and how I wanted to make this a bit abstract using poster design and explained that I was unsure of what kind of data I wanted to use for this project. I had loads of ideas going on in my head but they weren't clear nor usable.

Paul gave me a lot of advice on how potentially I will have to put the data on my poster, having the data readable, having some sort of system/key to visualize it clearly. We talked about how I could translate my listening habits into a poster. Paul suggested having a small visual for each day and making a poster for a week of listening. This would mean to have a series of little data vis put into one poster. I really liked the idea of how to put it visually, but still was conflicted with the data itself.

I guess it was too soon to decide and used the weekend to reflect on this and let this rest for a bit.

I commenced to draw and sketch some shapes and wondered how could they be used to translate data. Then I explored these on a poster canvas very randomly at first and then started to build up a system within my poster to show the data captions. 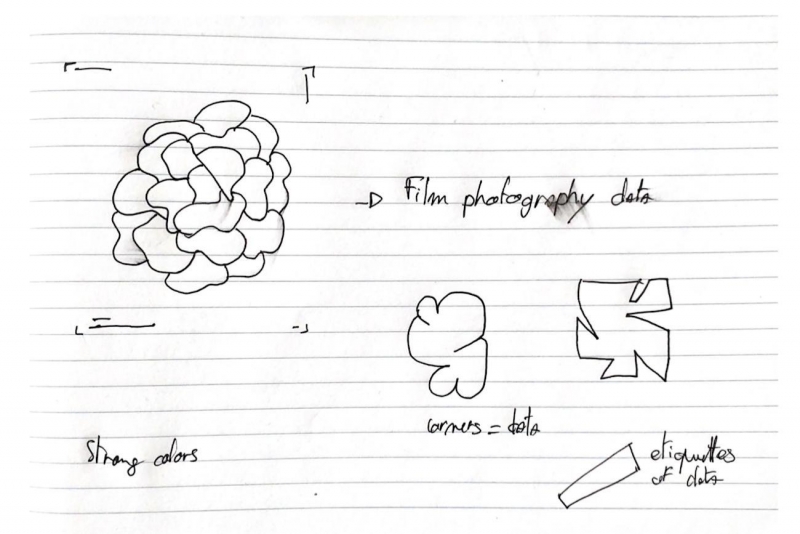 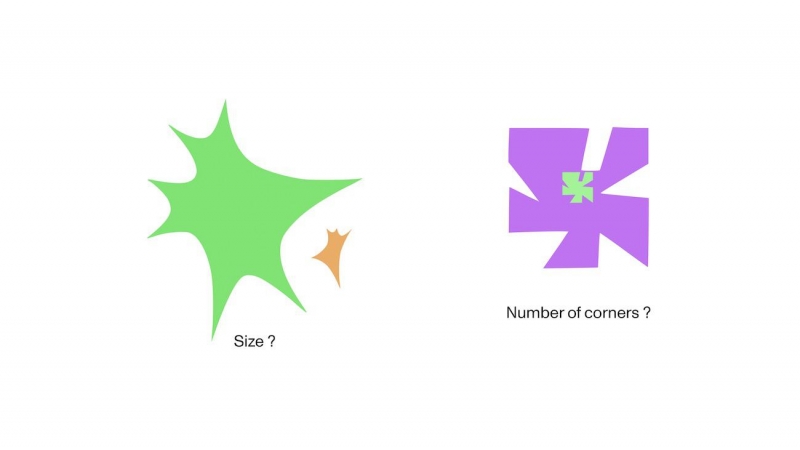 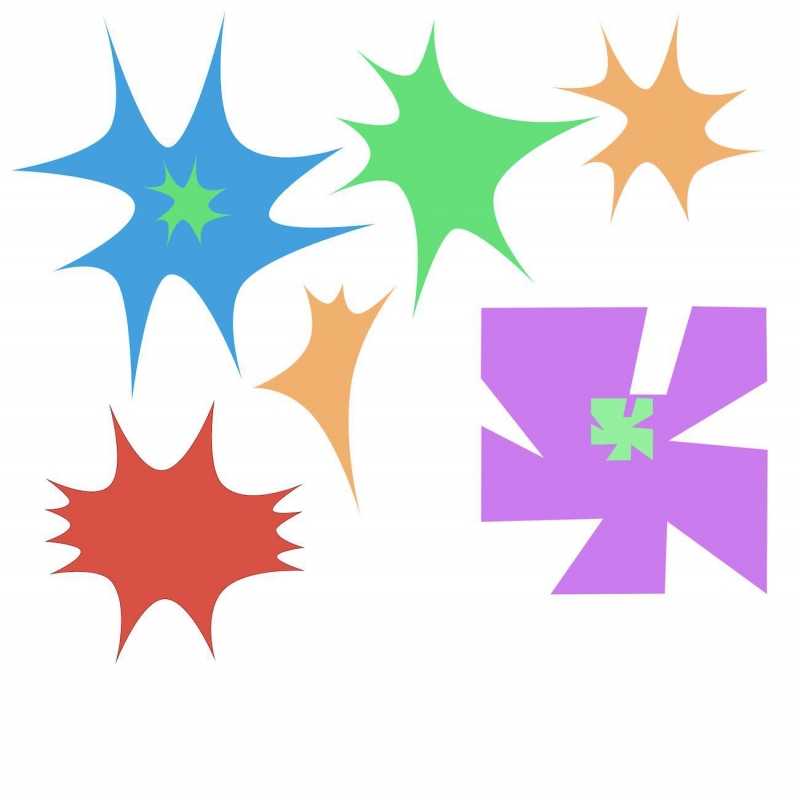 I really wanted to use some data from my trip to South Korea in 2019, the main reason is that I unexpectedly gathered a lot of data from this trip. Pictures, movements, places I've visited, transactions etc etc. I thought I could maybe use my movement tracking as data and put it visually.

I started to draw a line of my walking path on a map of the neighborhood I went to each day a bit like this poster I did.

I quickly realized this was not going to work as the data wasn't precise enough and overall it didn't work visually. There was no way I could fit 7 days of walking data on a poster canvas.

So I was back to my starting point with still no tangible data to use. I was still thinking about having pictures as data and thought I'll check the metadata I could get from my film photographs. I found out that there's literally nothing compared to a picture taken with a digital camera. This is quite obvious in a way but I think I've found an interesting lead on what data I could use. So I took a film picture into photoshop to see if I could find more data and I did find the histogram. So I thought I could use some raw and basic data of film photographs as my data, and use it to influence and guide my poster graphics.

Here's the difference of data I could pull from a digital and film photographs. 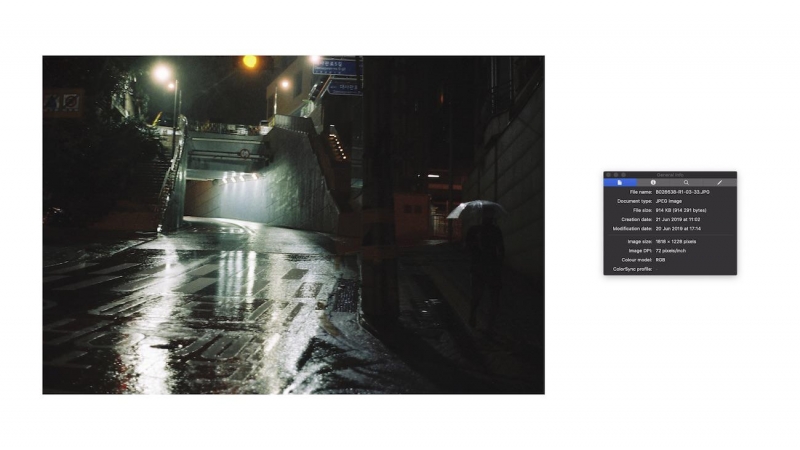 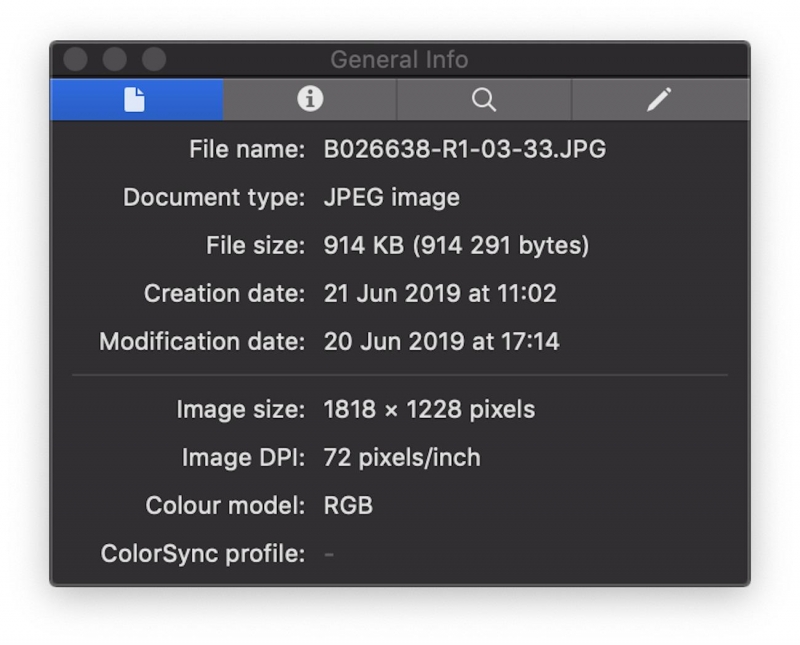 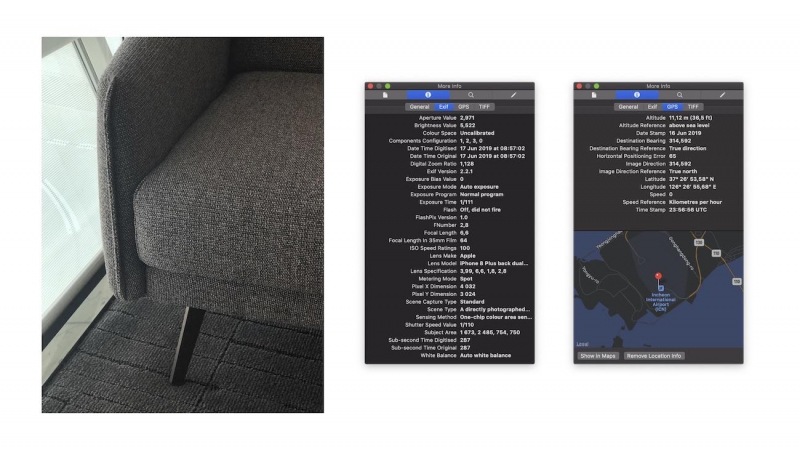 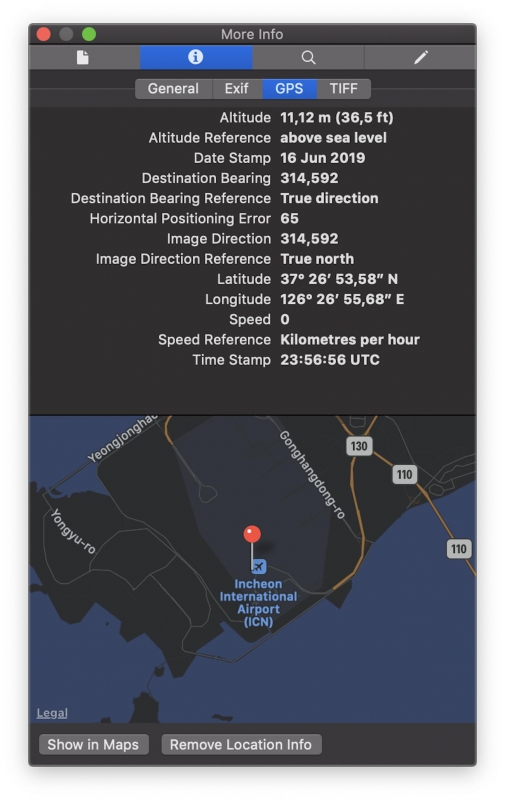 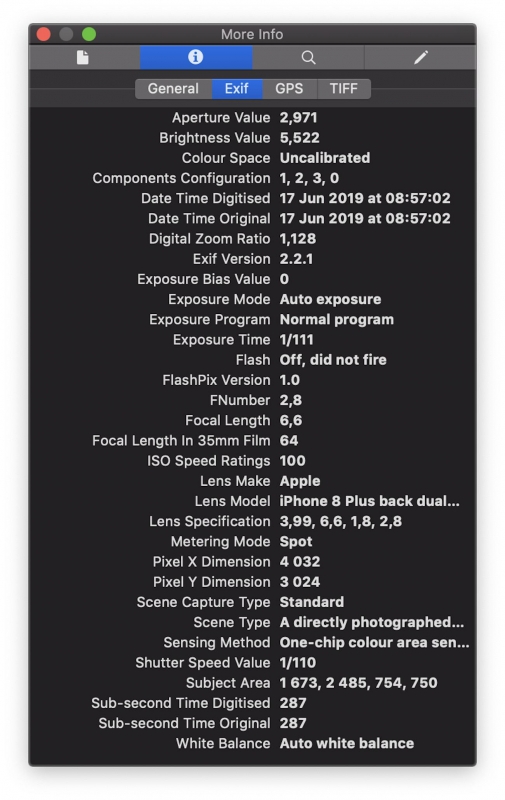 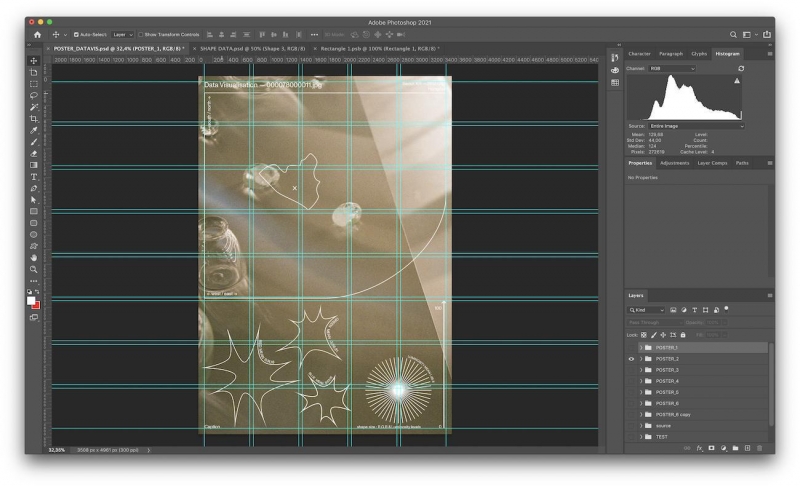 As I've experienced multiple ideas with posters ahead, I decided I'd continue to work with the visuals towards a poster. Something that did make me think a lot was about the picture itself. Should I show it and draw the data on top with a risk of not seeing the picture or should I make a poster with graphics only?

In my mind, I would create a poster like I usually do, and that rarely involves a picture in the design, so that was a new but interesting thing to consider now.

Here's some advanced exploration of posters with the shapes I've created before. 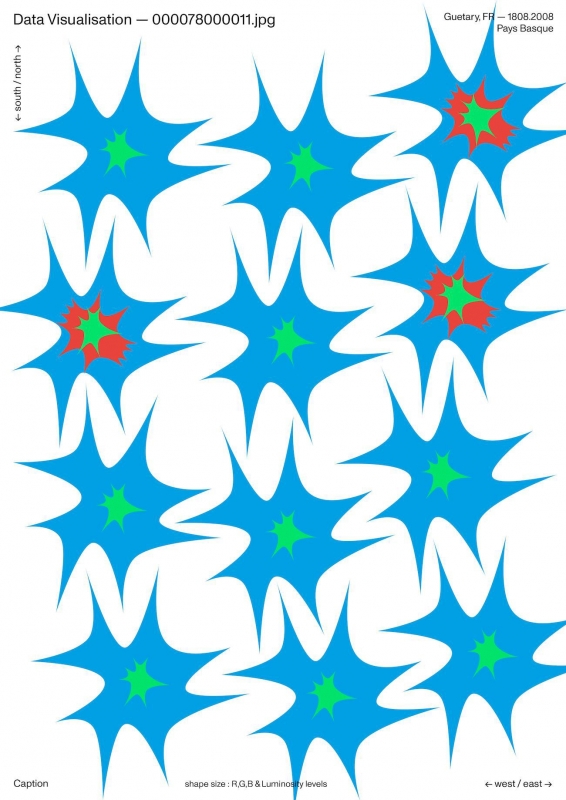 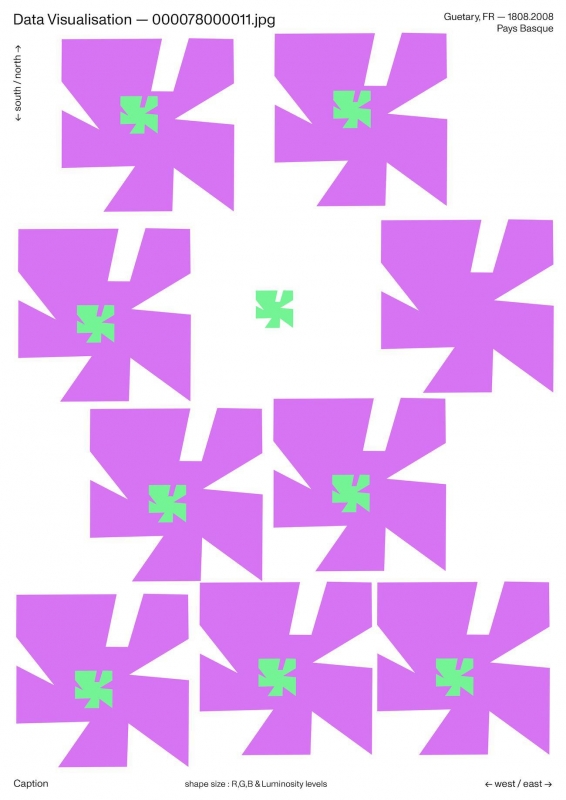 I've decided to take the film photographs as a background of my poster and add on top all the data vis elements, titles, and captions. 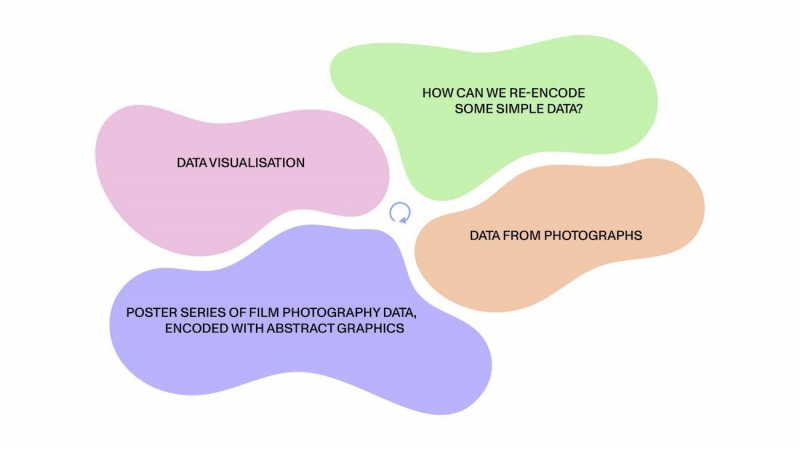 The posters feature a title on the top left corner, the approximate location where the picture + date was taken (city, neighborhood, date range) on the top right corner. Additionally, there's a square space where a little shape is drawn. This is showing the neighborhood and approximate location of where the picture was taken on a map. I thought having this kind of infographics on some less reliable data like my memory was a very interesting approach. As you go down you'll find the R,G,B, and luminosity mean values. They are represented by little spiky shapes as a representation of paint droplets for the RGB and the luminosity by a retro-esque sun.

Here are the maps I've used for different posters. 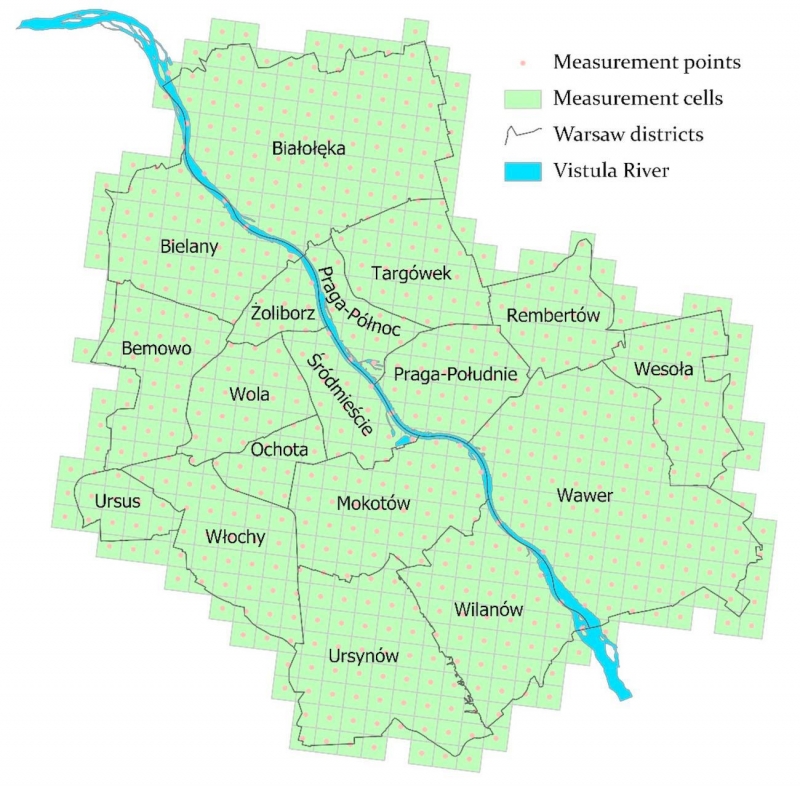 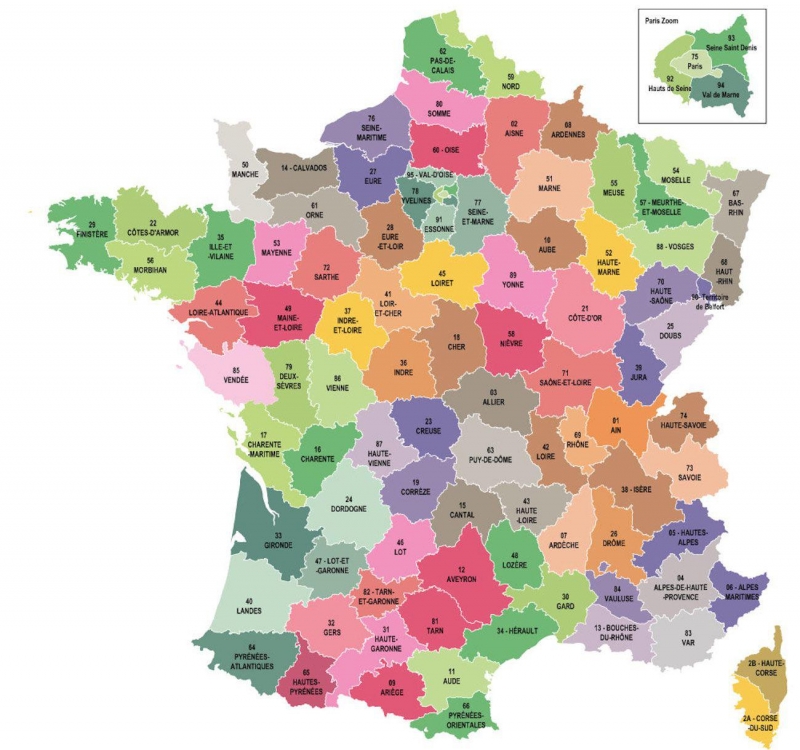 And here's how it blends with one of the posters :

Here's some poster in detail. 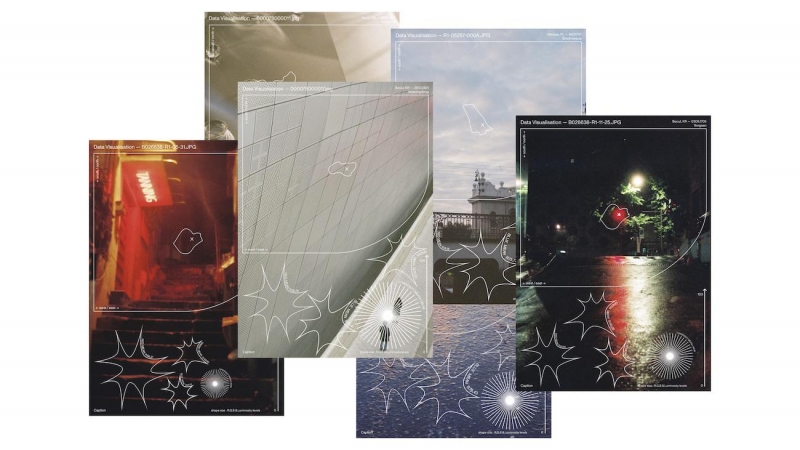 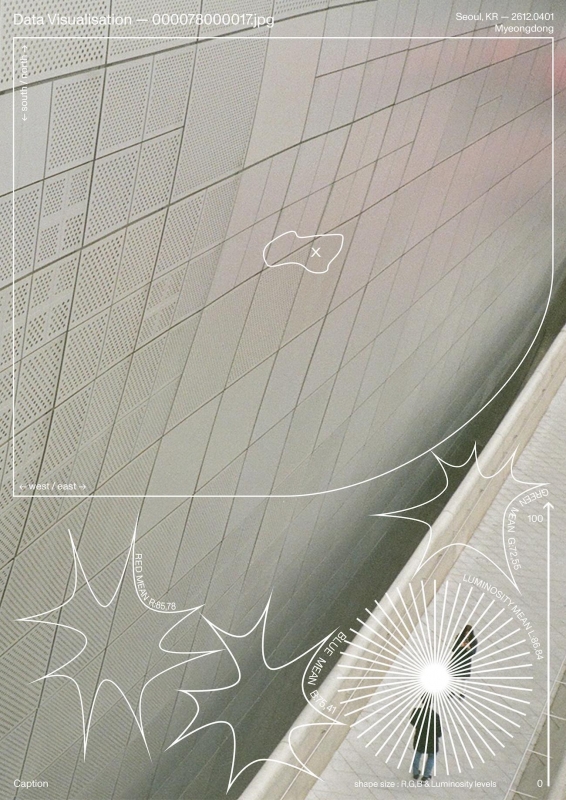 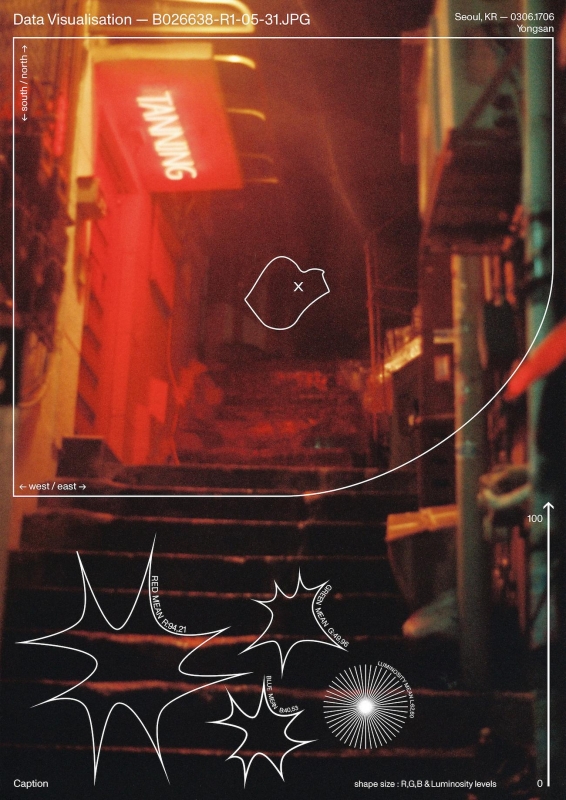 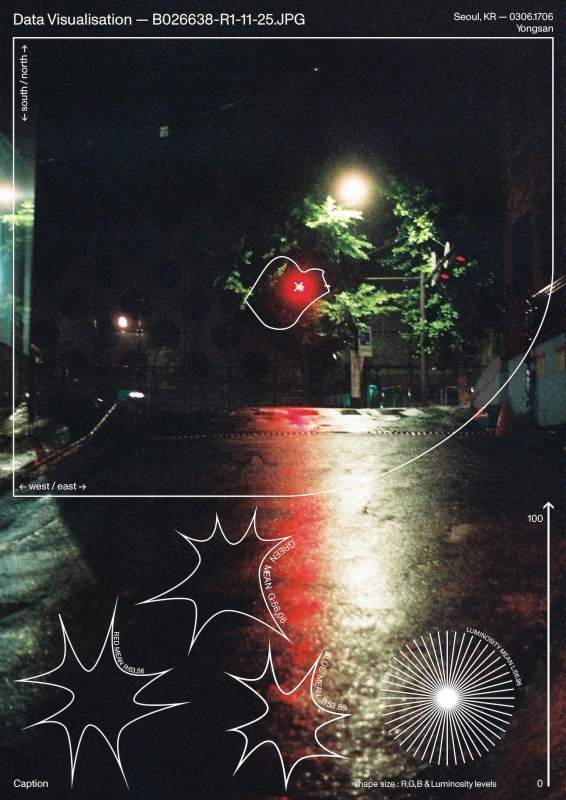 And the current series.

Here's the grid I followed to make the poster. This helps to have a better structure of visuals on the canvas : 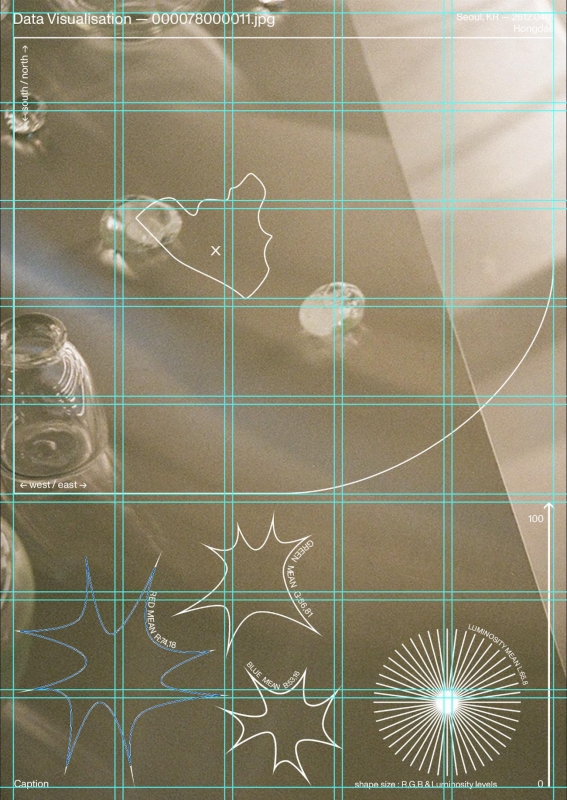 This was a challenging project as I kind of struggled to find meaningful data to use. I was really happy to work with these photographs as they mean a lot to me and it's a way for me to travel. Covid really messed my plan to go abroad to visit friends and family, and just looking or working with pictures from previous trips makes me happy.

After choosing I wanted to use the picture as a background I shortly considered putting every visual of my previous explorations as outlines only with no fill. And I was pretty satisfied with the result. It made a half poster-art and half data-vis poster. In a way I've built it so it can be interpreted differently, one may find it as a very abstract data-visualisation poster, and one may find it as a simple graphic poster.

I think I wanted to have an unusual and abstract outcome for the project, classic data-vis kind of scared me and as said earlier I really wanted to tie this with a more graphical approach rather that a code controlled visualisation.

Although this is a photoshop production, I unexpectedly built this poster system so it can be pretty easily automated using processing? I did this kind of poster generator with processing the previous years and it worked well, so I would be very curious to try this out on Processing again.

I think that would be the major improvement I could do, and definitely do it nicely as I'll have more time!

Additionally, I would love to expand the data, and maybe have more to show, or create a little bit more scientific/detailed visuals so it can truly be some real data-visualization instead of a quite literal way of seeing a picture.

This was a great project, I particularly liked all the workshops and new methods we used to sort use, and export data with Processing, even if I didn't use it right away, there's loads of potential for some project later in time. I loved all the references we looked at, this is a nice thing that is not present in every project and something really interesting. Additionally, it's interesting to see what people we would maybe never hear of can bring to projects.

I had a bit of trouble to find the data I wanted to use, but I think it went well in the end, I managed to create a small poster series, a bit last minute, but I guess the time thinking was worth it.

Overall I'm happy with I've produced, not entirely satisfied as I feel I've waisted some time, but I want to compensate for this by improving my project more and more!

Some of my poster generator project made with processing :