Dimensions is an introductory project to 3D animation and modeling and working with the notion of "Space". The brief focused on making a 3D animation using Maya with a 30 sec restriction.

The first week was mostly dedicated to workshops and learning how to use Maya. We were taught about modeling different things, texturing, cameras, animating, rendering, and a lot of tips that would help us create our animations.
I already worked on 3D software like Cinema4D, but as Maya is very different it helped me a lot to understand the whole workflow and also new stuff I didn't know at the time.

The first week helped a lot to practice and learn new things about 3D modeling. As I had 3 weeks for the project I didn't want to rush things and try to get an idea right away that I might not like afterward.
I took the time to explore different paths, watch movies and other artists work.
At the end of the week, I watched multiple movies from Gaspar Noé, 'Enter the Void' and 'Climax'.
Both movies have a fantastic camera and photography work. Gaspar Noé focuses a lot on space in his movies. He tries to use every angle available and doesn't follow classic cinema rules (like 180max angle shots).

In 'Enter the Void', almost every transition between scenes are made with camera movements going in and out of round objects. Like entering and leaving a tunnel. These tunnels are often represented by abstract things or just overshot of Tokyo streets.

After seeing this movie I wanted to work on the notion of space and infinity. Gaspar's movie "tunnels" always have an end, so I thought why not explore infinity since that's something that interests me a lot and I haven't had the opportunity to work on yet. During the whole project, I focused on my vision of infinity, something that doesn't have an end. But slowly getting into the heart of the project my vision evolved and weirdly added characteristics like linear paths, no colors etc. 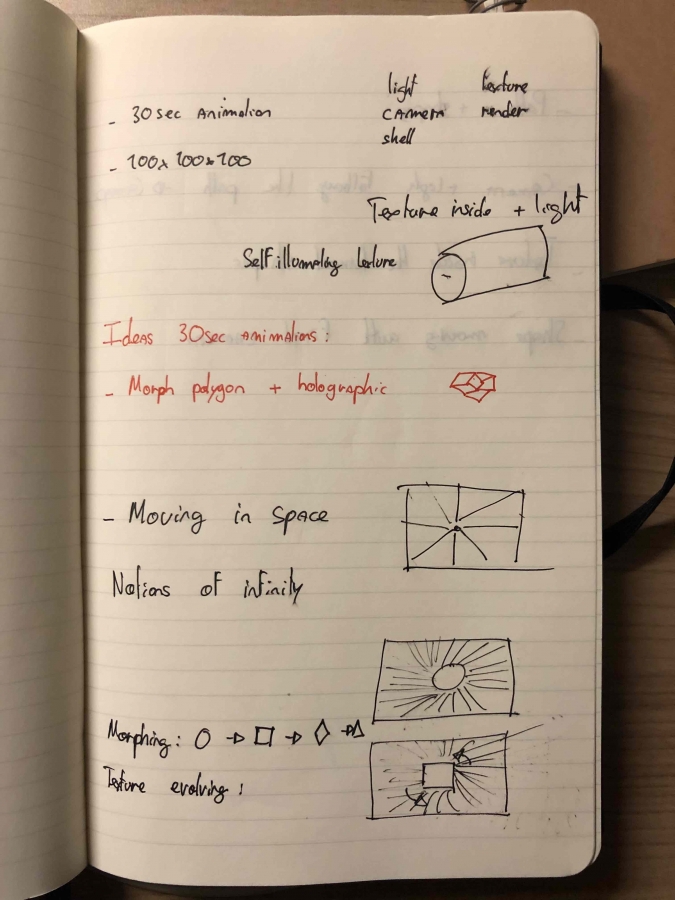 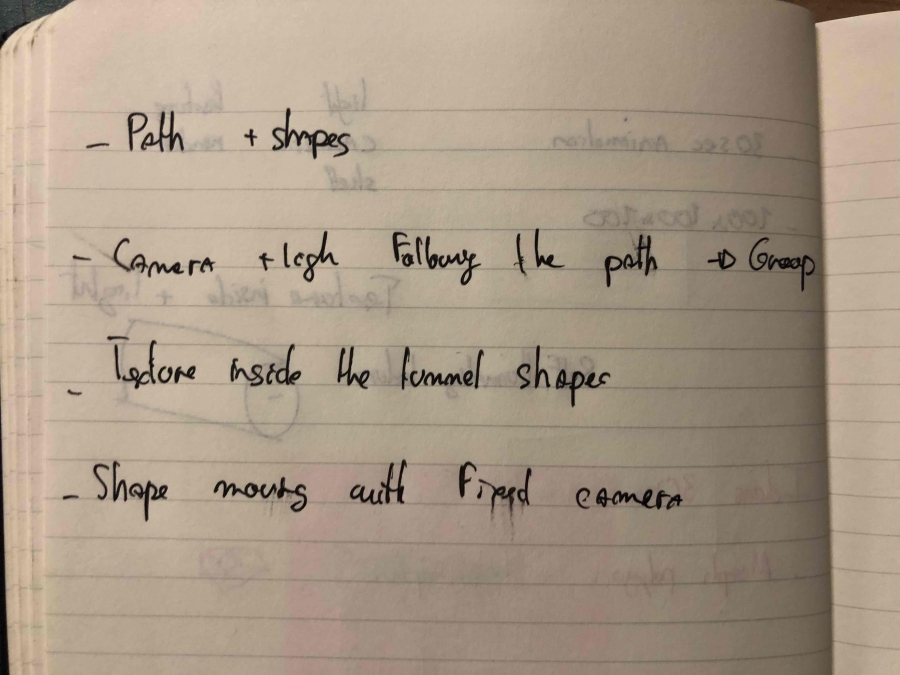 Week 2 started with our individual tutorials. I explained my vague concept I had at the moment. I explained what I wanted to explore and explain the final output as I was imagining it. I was thinking about creating a sort of tunnel that would evolve through times with shapes "portals".
Gillian very thoughtfully advised me to keep a simple and contemplative structure of the animation. So I rapidly stuck with a circular tunnel and explored different things with textures and tunnel path.

I looked into the resources advised by Gillian (James Turrell work and Tron), they had very interesting notions and uses of space. It inspired me to experiment multiple things with colors. I'll dive into it in the next part.

After the tutorial, I started to create my tunnel shape in Maya. It took me a few days to handle it properly and understand how the curves worked. I used a curve and the top of a cylinder to create the tube. I extruded both objects and it created the tube. I managed afterward to edit the curve, hopefully, the whole tube followed the edition.

Different steps of modeling the tunnel. 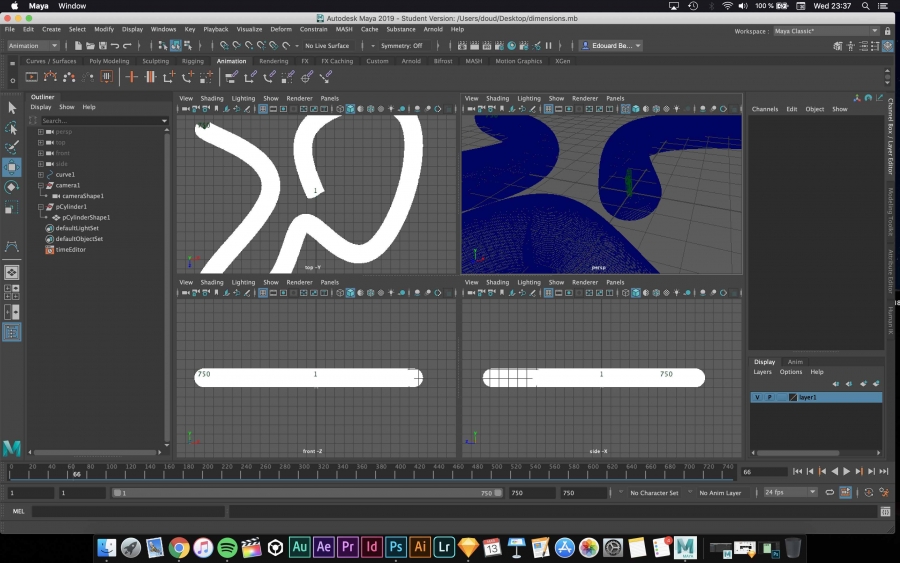 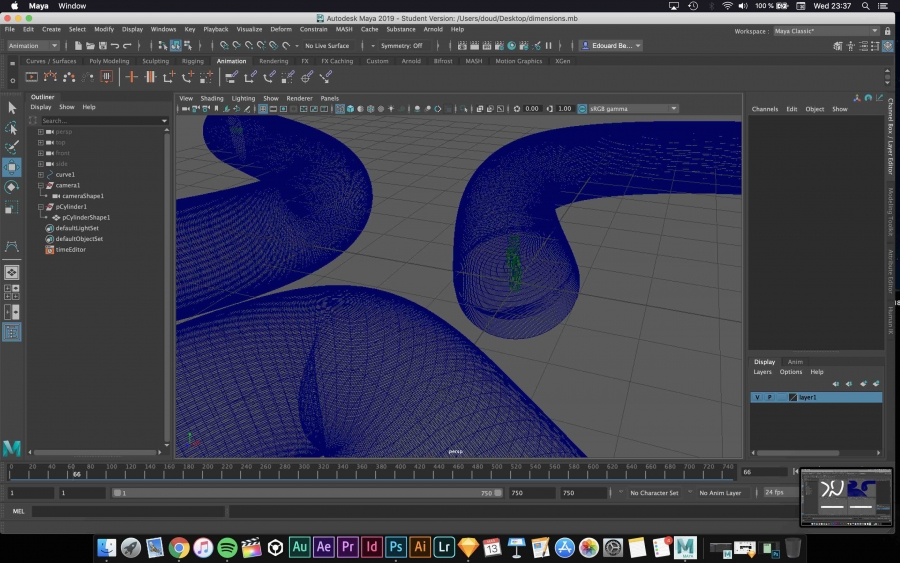 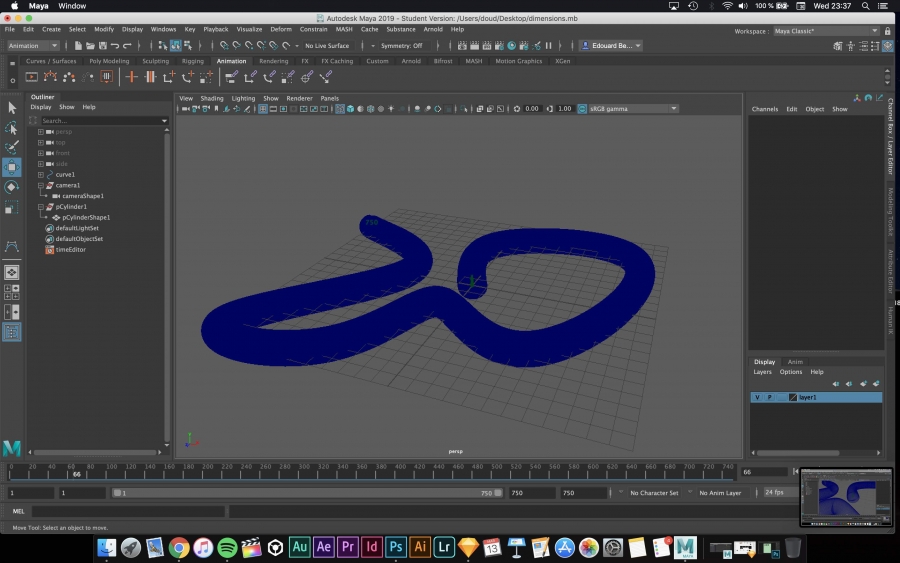 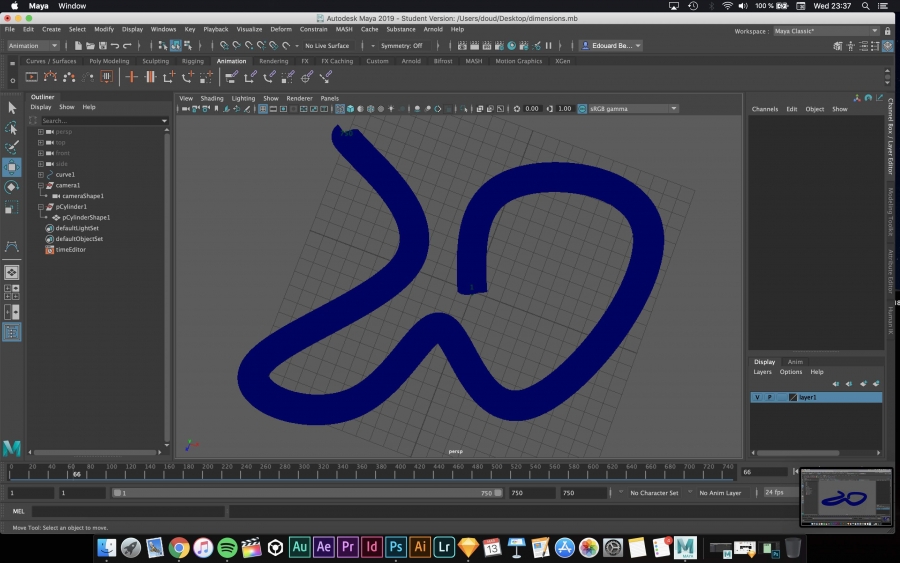 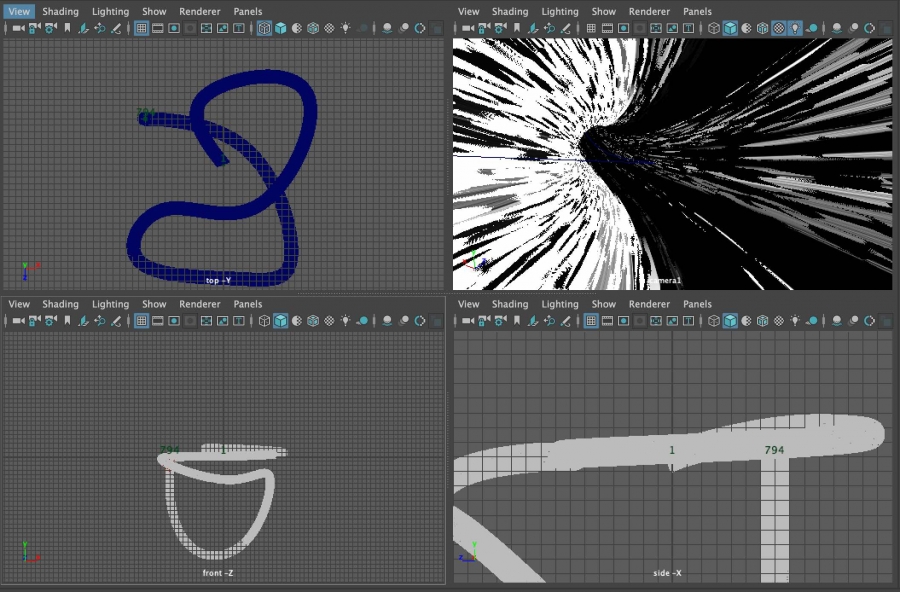 After setting the shape of the tube I set the camera movement through the tube and started to experiment with textures.
The textures were really important as it was making my whole animation. Without them, it wouldn't make sense. 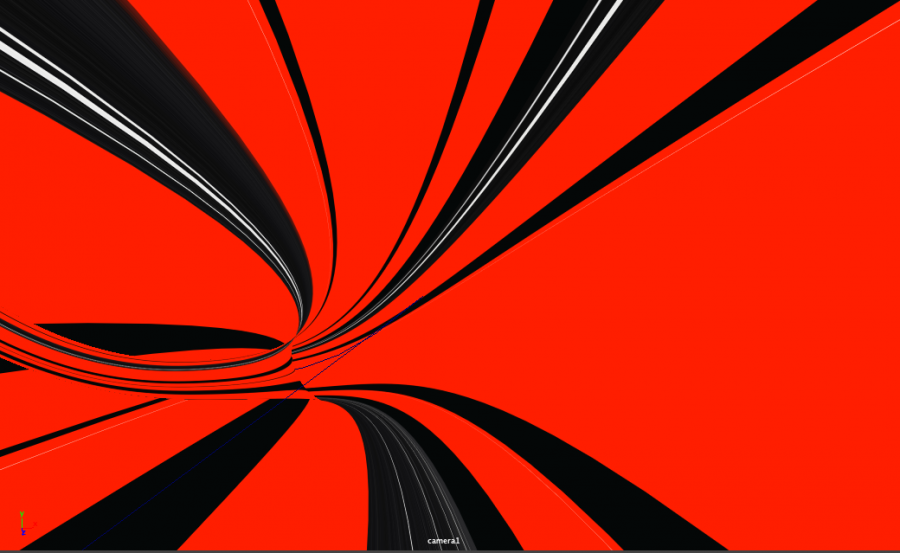 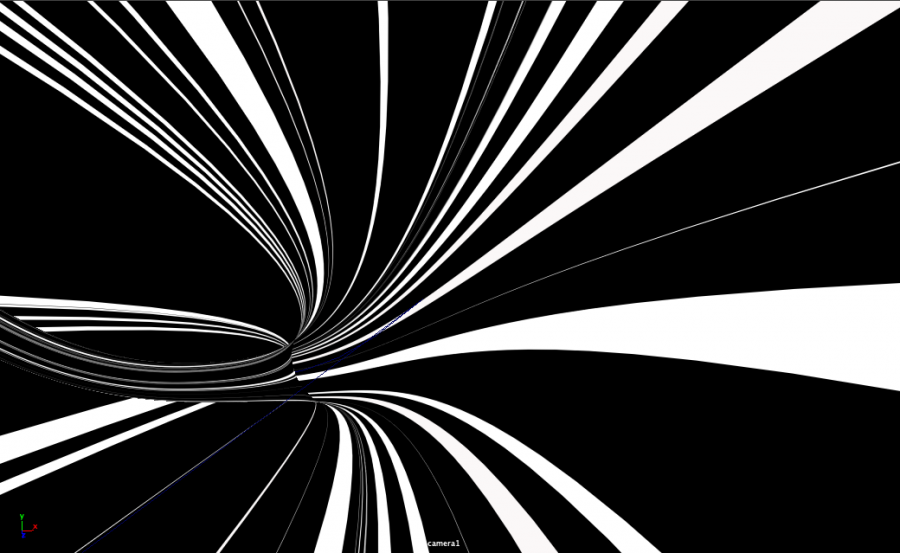 Those linear textures were my first vision of infinity as you don't really know if you're moving or where you are within the tube.

Then I tried multiple things and stumble upon a very nice texture if you displace it. It gave me a more 'loosing your mind'. The overall effect of infinity I wanted to express was multiplied, as you really can't tell whether you're moving or where you actually are within the tube. I think it amplified and added something different to the feeling compared to the linear texture. 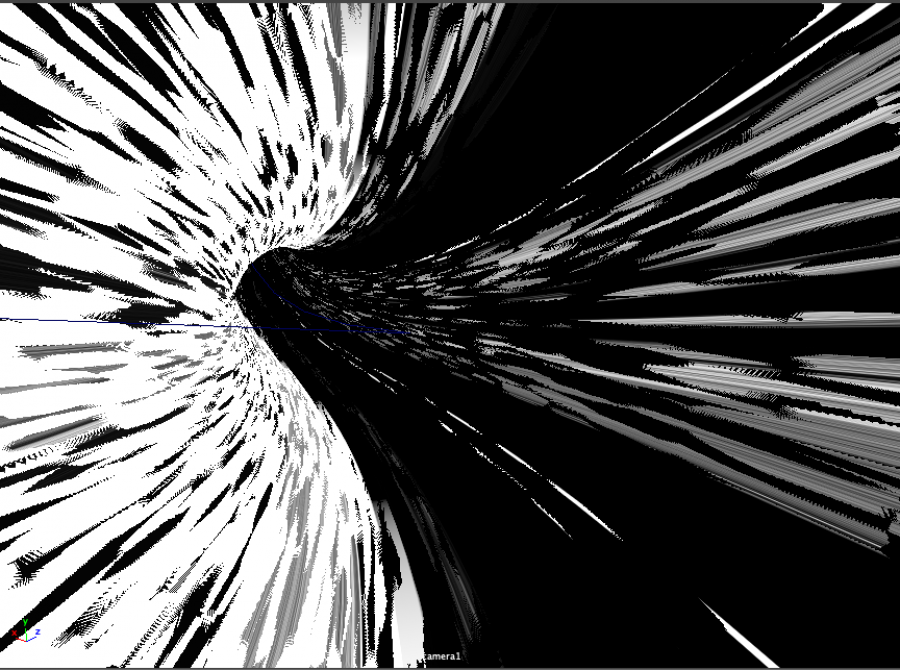 After having the texture set up I played with different colors, but the animation was more focused on that then. I wanted the spectator to focus more on the path and camera movement more than the colors etc. That's why I kept black and white textures, one linear and one displaced. I think using a simple color scheme reflected more my vision of infinity mostly because it evokes me a notion of linearity and simplicity which can be perceived also in the 'infinite' concept as I see it. I think these choices are personal and reflect all the influences I could have during my childhood with movies and books picturing infinity.

I tried multiple default textures of Maya and then tried with PSD files I previously created for personal projects. I chose to use them because they could bring a kind of randomness to the texture when applied. I enjoyed the fact that I could control where the lines would be applied within the tube walls. 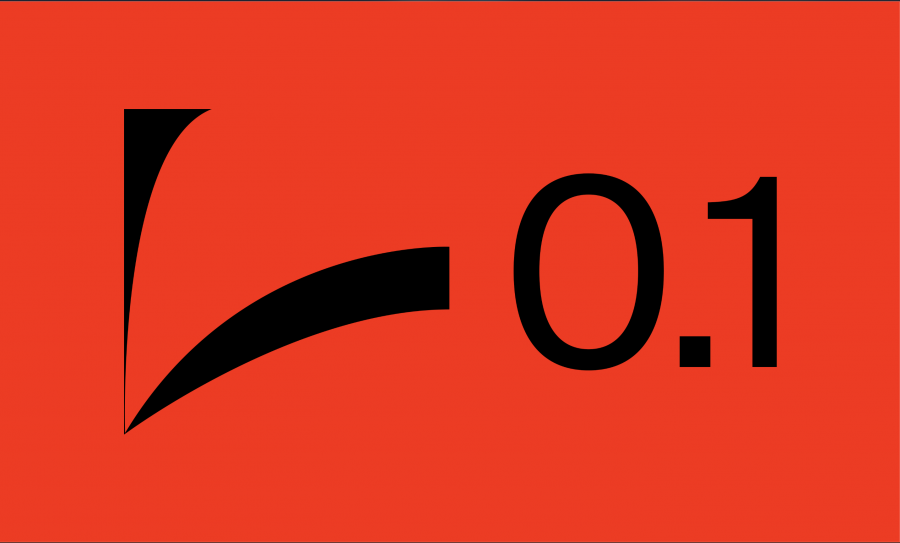 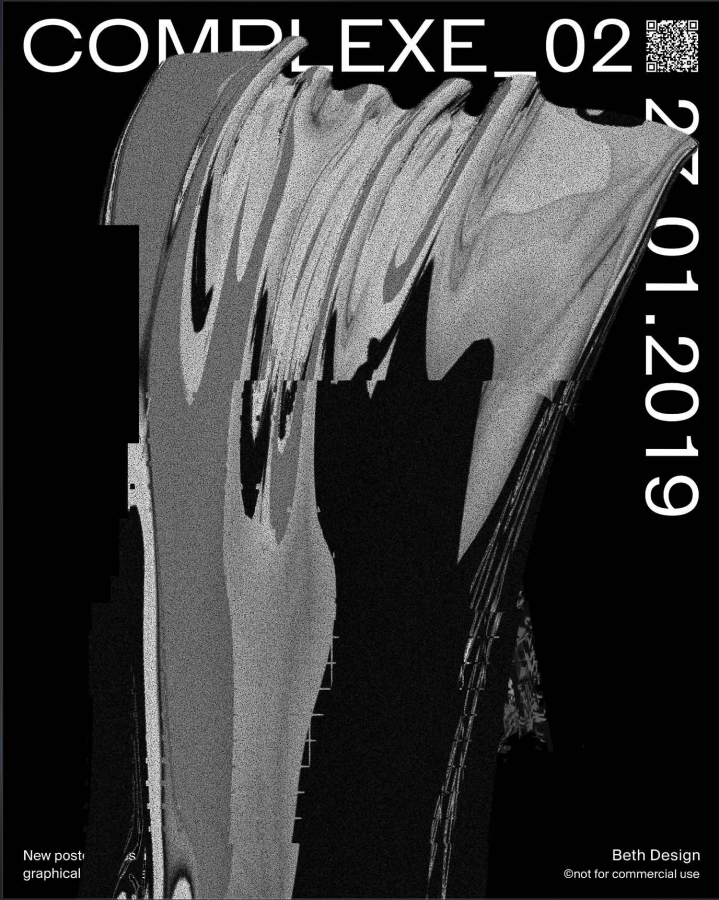 Beginning week 3, I had everything ready expect some little camera and render issues.

I only had some issues with the set up of the camera and having my texture rendered inside the tube. I followed some tutorial on youtube but they weren't covering the issues I had. Hopefully, Gillian helped me a lot during studio support, so I managed to have my camera set up correctly and my texture finally rendered properly inside the tube.

A downside I didn't quite anticipate was the render time, as I rendered 2 same animations with different textures it took me 2 full days to render. Hopefully, both outputs were great!

As I said I produced 2 animations that are very similar. The only difference is the texture and the wideness of the camera lens.

For this project, I really wanted to explore something I've never explored before. I was really inspired by Gaspar Noé's works and wanted to do something around infinity within a restricted space.

I thought it would be very interesting to exploit the restrictions of the brief (dimensions 100x100x100) and suggest that we can evoke and create a feeling of infinity within such a small space, just like an illusion.

I think infinity is a very interesting notion to explore and is not so often expressed in art. 3D is definitely one of the best tools in digital art to create this feeling of infinity. I think it is a very unique combination of tool and notion.

I guess I wanted it to be longer in some ways. I felt it was too short to let the spectator really dive into the notion of infinite and lost in space. I also think I want to add a soundtrack to it, maybe to emphasize the feeling? I'll try different things for summative assignement.

I really enjoyed this project. As I already worked on 3D modeling and animation in the past it wasn't completely new, but I learned a lot more stuff thanks to the workshops and the overall project.
Exploring such an intriguing notion was really interesting and enjoyable. Having the time also to learn the tool and then think about a concept and reflect on it was very good. I didn't feel rushed, but considering the amount of time given for production and reflection (2 weeks) I feel the assignment could have been a bit more ambitious? Maybe a minute long animation?

I re-submitted the assignment and added a slower version of my animation. I think it allows the spectator to focus more on the texture animation and camera movement.

I also try to document as much as I can my project and share it on my "professional"Instagram account :

DIMENSIONS Exploration of infinity _ project conducted at the @glasgowschoolart