We started this project with an introduction of the Non-Linear Narratives concept. A non-linear narrative is a form of narration that involves multiple choices which will change the direction of the story and its end.
We were shown two software that would help us create our own non-linear project.
The first called twine is a text-based software where you can link words to another bit of story.
The second software is called LiveCode. It's the same concept but you can play with media (images or gif).

For this project, I first wanted to talk about social media hypocrisy with a twine story where the user is taking over an Instagram celebrity account. He could choose his actions and they'll influence the celebrities influence over the time.

The only problem is that it was based on my own vision of social media and how I see it.

So starting from there I thought it would be interesting to take this into account and create something that is really based on my vision and share it with others.

Only on Thursday, I had the idea to talk about art and my vision.
So I created a twine project where I talk about multiple aspects of art. Each aspect defines a part of my definition/vison of art itself.
I based my little narrative experience on a question: "How is this art?". I wanted to explore what aspect of each creation can be considered as art and how.

I first had an idea where each letter of this question would link to a definition but it was quite linear.

So I started to write multiple "cards" on twine and linked them together when I had the opportunity. As my definitions were sometimes related to each other I could link them easily. 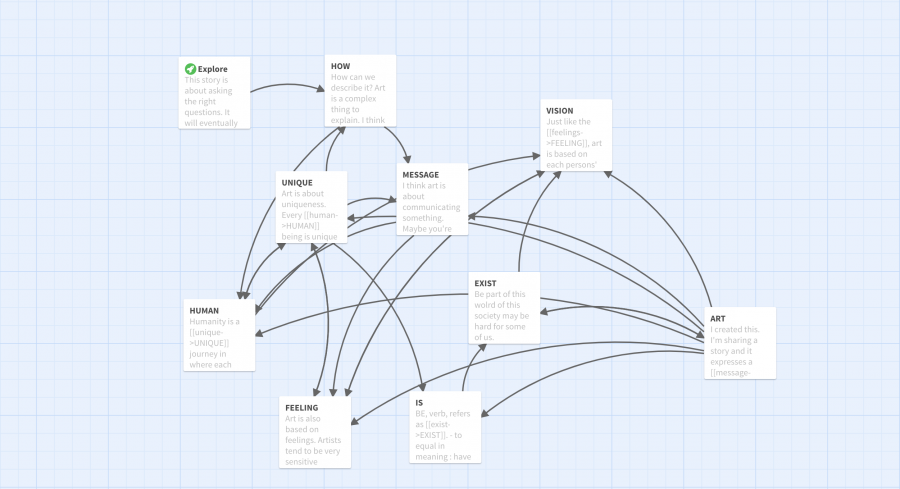 The story ends up with a final screen where the user has access to every aspect I talked about earlier.

With this maze-looking map, the user is almost certain to lose himself trying to find an end and might end up doing a loop. My aim here with this story was to explore a way of storytelling that isn't boring and that every user would focus because it is straightforward and creates a kind of suspense because you don't know where it ends.

Sadly as I didn't have much time, I couldn't try to add some CSS to style it. I think I want to make the text quite big with a touch of color. I like the straightforwardness of Spotify's art direction with big and bold text. I think it would be quite interesting to implement that with CSS.

I will certainly submit a new version of this work later on with some CSS and some new card to create a bigger "world".

I really liked this project because it forced me to explore a field I'm not really comfortable with. Writing stories (even in French) isn't my cup of tea, I prefer to express things with visuals assets (video, graphic design, etc).
For this project, we didn't really have to focus on the aesthetic. The experience was based at 99% on the text displayed. So we really had to work on the story and how it is told (Non-linear concept).

I took the opportunity of the spring break to improve many of my projects and add details to my reflection.
For this project, I added as I wanted some CSS to it making a bit more "visually pleasing" instead of the regular twine default fonts, color, and sizes.

For the non-linear narratives project, I just wanted it to reflect more the meaning of my piece instead of the default visual settings. I chose colors with a lot of contrast (black, white and pink), so the user's eyes can directly focus on the words I want to highlight. I increased the size to make it more impactful and to retain the user's attention. I think increasing the text size makes it also way more readable than the default size.

the updated visual aspect of the project