Openshare is an end-of-year project meant to improve, document and sg-showcase some of our project we did this year. It's divided into two parts, an improvement and showcase part which is part of an exhibition and a video showreel of 3min showcasing 3 projects.

Ahead of the summative assessment, I took the opportunity of the spring break to improve some of my works and add details to my learning journal posts. I didn't know that we would have a dedicated project for that, which was a nice surprise. I decided to improve my creative coding project (one sketch) as my brief response was a bit off-centered. We had to focus on visual and I mainly worked on sounds.

As part of the exhibition, we had to organize and set up for the course, I was in the Navigation team. Our job was to put up signs and directions to the studio and create a range of maps to navigation to the building and within the exhibition. We rapidly met up and split tasks. I volunteered to create the signage within the building. My job was to create a range of signs to help visitors make their way up to the studio. The signage design was depending on the official exhibition poster so I had to wait for the promo team to give me all the design details. Then I could create multiple signs and hang them in the building.

2 of the signs in the 3 main colors used for the art direction of the exhibition. 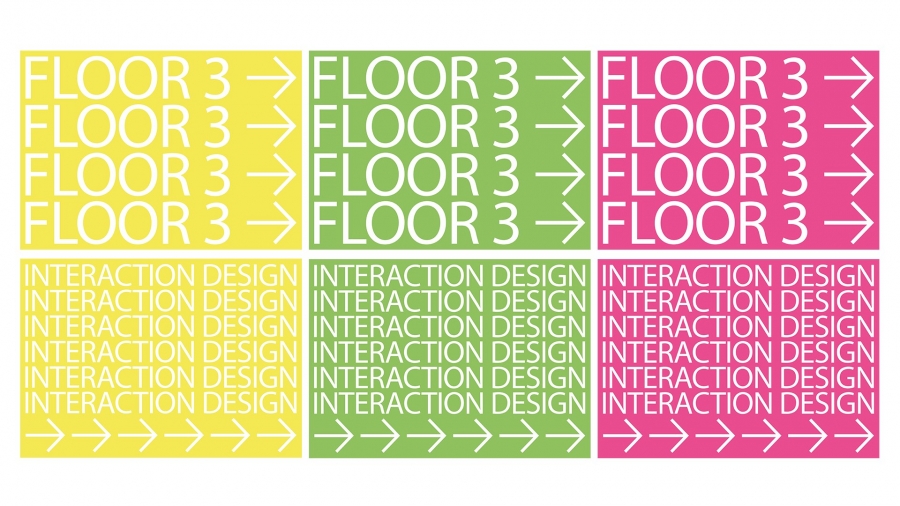 The poster used as a reference for the signage design.

We were mainly depending on the curatorial team for some of the tasks (exhibition map) so we had to wait until the last minute to get all the info and create the exhibition map.

During the tutorial, I explained my plan for my project improvement. As explained above, I wanted to improve some part of my creative coding project by creating new sketches involving fewer sounds interactions and more still graphics. The brief explicitly focused on the visual part of processing.
We talked about it with Gillian, she guided me with a more graphic approach and suggested me to do something with graphic design as I do enjoy this part a lot.
I started to lay out ideas and stuck with a more reflected approach of the project. Instead of doing something purely visual without any meaning, I wanted to add a little personal touch to it.

The sketch is called OBSCUR. I wanted to represent different emotional states through a series of poster randomly generated. The poster features a poem, a photo, a background color, and a title. All these 4 parts are randomly 'called' from a small library of 8 to 11 elements.

"It is a visual journey created by computers and randomness. Travel through lines, pictures, words, colors
and link everything up to interpret your own message. The viewer can view and subjectively understand each poster in its own way. All texts are in French, language I chose to express my feelings trough little poems because of my emotional state when I had to create my creative coding project back in October."
- statement used for the exhibition

I wanted to create an impactful processing sketch involving multiple things dear to my heart.
Back in October, I was in a rather sad emotional state I was just settling in. My link to my home country was really important to me. I decided to make this poster series about emotions and dedicate it to my emotional state from October.
The posters are set vertically to fit an HD screen 1080x1920. Each frames the sketch "calls" a title, a poem, a color, and a picture. I've set them to be in a certain variable or fixed areas. There are in total more than 5600 possible combinations. 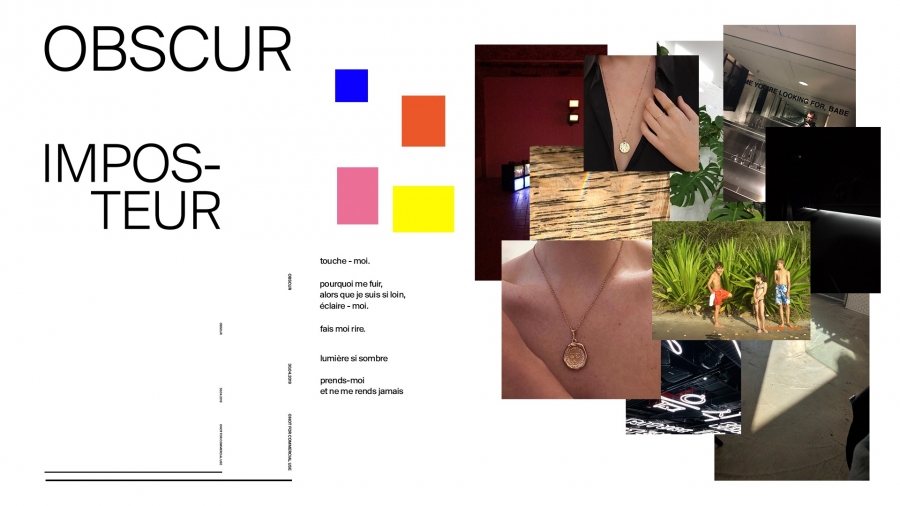 The posters are randomly generated by the sketch. I wanted to focus on this concept to have multiple combinations and showcase the multitude of possibilities of emotion interpretation. Back in October I wasn't feeling well emotionally and couldn’t really identify the reasons. The poster series offers the viewers a huge range of interpretations. As all the poems, title, colors and pictures mean something very important to me, the interpretations will inevitably be linked to one of my emotional states at that time. With this piece, the viewer is the sole interpret of my range of feelings.

During this week, in parallel, I also started to work on my showreel. I decided to showcase my soundscape project, as well as my dimensions, project, and the creative coding project. I started to gather all the graphical assets I needed to start the edit and selected multiple soundtracks to try.
I wanted to present my projects with the same aesthetic of my Instagram account. So I reused the same kind of layout and played with the soundtrack to synchronize the whole thing. I had to wait in order to record some footage of the exhibition later next week.

I chose to use only a few camera footages to be more coherent with the aesthetics I chose to go with and also because I didn't find relevant to include real camera footage of me editing sounds or coding. I prefer to showcase the final piece and support it with coherent visuals (posters, different versions, etc).

Finally entering week 3, I finished the last parts of my project improvement and helped out to clear and set up the studio for the exhibition. I personally loved painting the plinth as it was a kind of relaxing moment inside the storm.
Once the studio was almost ready, I started to try and set my two monitors for the exhibition. I first wanted to export two PDFs of my poster series, but apparently, you can't play two slideshows simultaneously, so I decided to modify my sketch with a framerate of 1 and a delay to get a kind of slideshow from processing. So the final set up was 2 processing sketch running on two vertical display.

I decided to go with 2 monitors to allow more people to see the work simultaneously and also because it could create a more dynamic feeling to the piece. The user can choose to stick with one monitor or both. Otherwise, it would be quite slow and somehow I feel it would have been boring.

Testing the skecthes on the 2 monitors 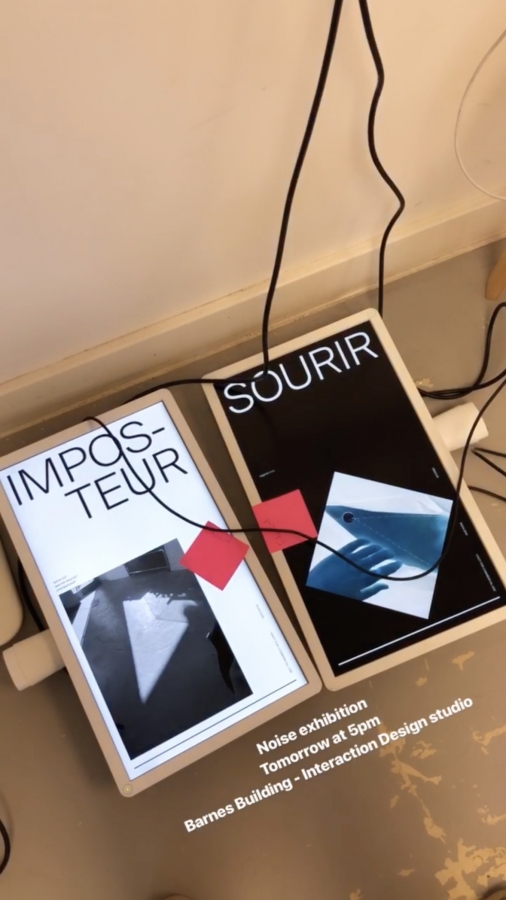 The exhibition ran from Thursday evening to Friday afternoon. My piece worked without any issues!

Overview of my final setup. 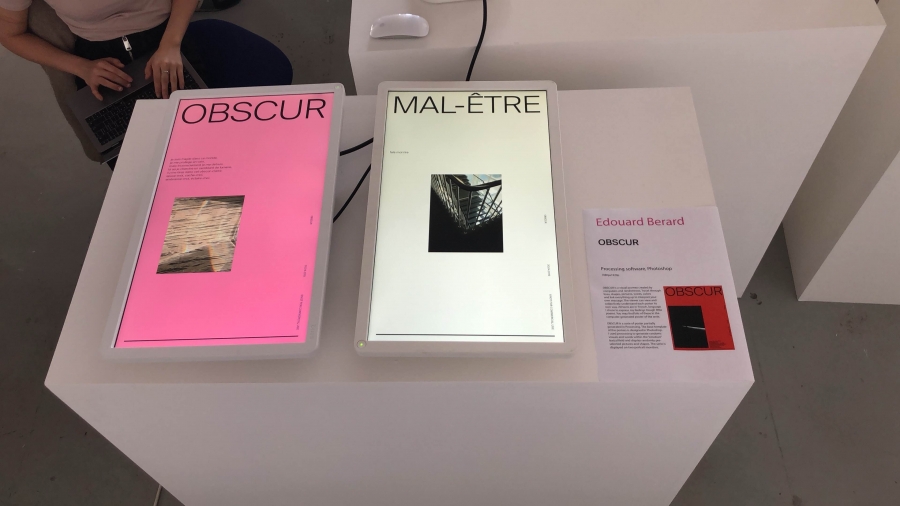 I was very happy to be able to re-work some of my projects during this period of time and also devote a big part of this given time to improve one particular project and showcase it to an audience.
I really enjoyed having multiple deadlines and multiple things to create/work on, the ambiance was very dynamic sometimes stressful but for the good sake.
Having the opportunity to showcase our work during an exhibition and a showreel was really important to me, I dedicated a lot of my free time during these 3 weeks.
It was an immense achievement to finish the year with an exhibition and showing my work to a public (and my family/friends through FaceTime ).
I think this exhibition was very successful and showed to other departments who we are and what we're doing. I hope Interaction Design will have a bigger role in the years to come within the Design School.

I would also love to re-iterate this experience next year and maybe advertise a bit better the show.