Realtime Events is an introductory project to Unity software. We had to create a visual experience with the software using methods we learned in the workshops conducted during the first week.

The first week was mostly about discovering the software, learning the tools and exploring very different possibilities Unity had to offer. We started with very simple modeling and continued with adding more complex things to the scene like a First-Person Controller, light animations and eventually scripts.

During the different workshops and studio support sessions, I kept experimenting with different things: lights, terrain and animations. It gave me a rough idea of what I could do with the software.

In the past couple of months, during summer, I've done a lot of introspection about my life today and the past experiences I had. I wanted to illustrate this by creating a sort of abstract world filled with little objects/attentions that meant a lot for me. I find very interesting to see how people can interpret different things because of their past experiences in life.

I was really inspired by the clip of a DJ called Ross From Friend. I loved the way the camera moved around the space and the overall atmosphere created.

I was also interested in doing something vertical. Mainly inspired by Hong Kong high-density living spaces. 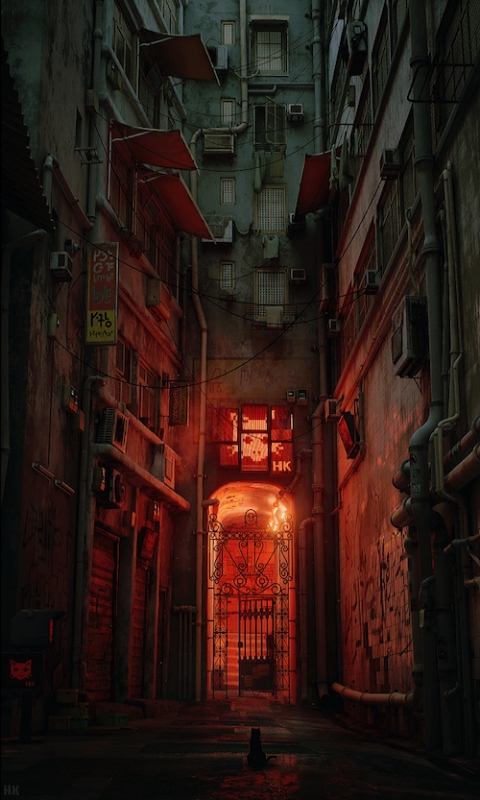 I then realized I won't necessarily have the time to create this abstract world because the modeling would have taken too much time and that the idea was maybe too literal and kind of egocentric.

So I took a few steps back and did some digging in my head. During the long weekend, I felt like I wanted to make this project about the different state of minds that makes you feel good like happy dreams or non-conscious happy happening.

So I narrowed the idea to a simple world where I supposedly feel good. I developed this idea around the atmosphere and not the object as I wanted before. I wanted to create something where the audio and visual atmosphere makes me feel good/safe. A world that is inspired by my dreams and non-conscious memories. It's almost a sort of simulation/transcendence. (def. experience beyond the normal or physical level.)

It's very hard to remember our dreams etc. I remember very few of them but I know I dream about multiple things in life, some very real like going to Hong Kong and some rather abstract like an unreal environment made of neons. I took both real and abstracts into considerations. A kind of visual guiding thread started to emanate pretty quickly.

I was really inspired by an advert by Air France in 2011 called "L'envol". It was shot on a giant mirror set up in the middle of a desert in North Africa. 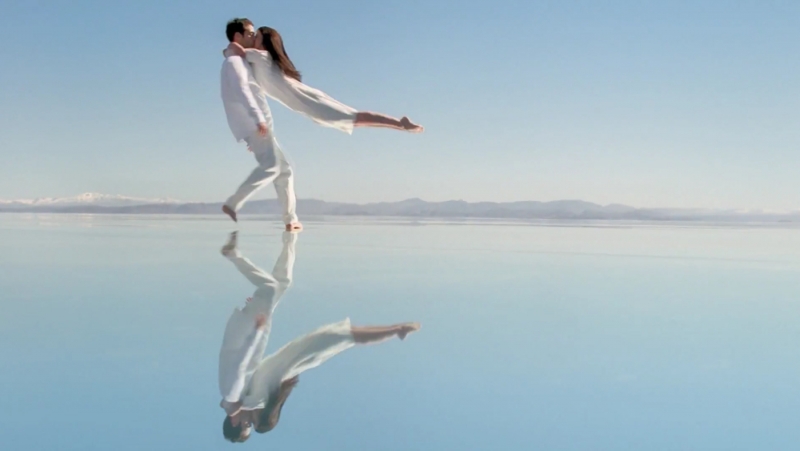 In the same kind of vibe, I was inspired by the iconic scene in Stanger things were Eleven is searching her mind. She's in a black room filled with a couple of centimeters of water. 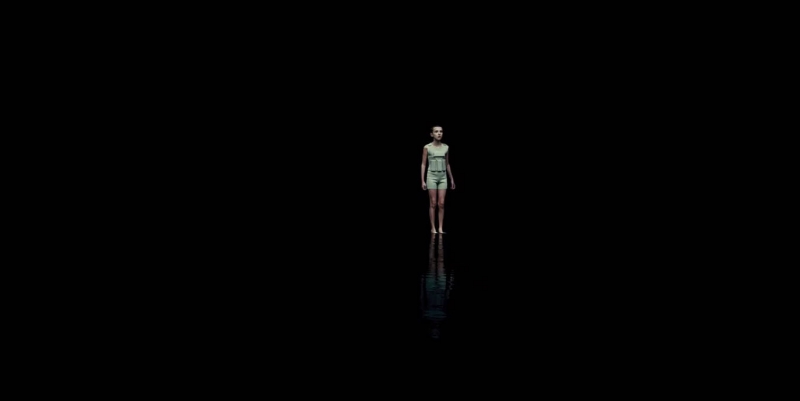 And finally, I was very inspired by the overall light work of Gaspar Noé's movies. 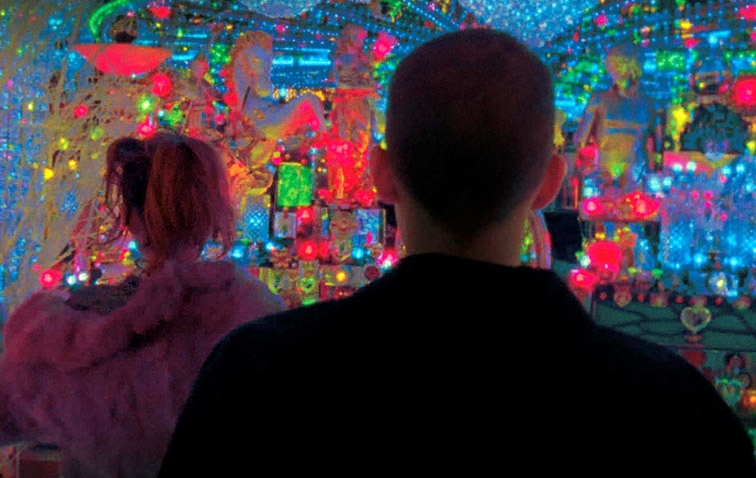 I also was inspired by a composer I listened to a lot during the summer, called Lorn. His music is pretty experimental but makes me feel a lot of things. I can imagine myself in some dream places quite easily.

Having my idea pretty clear in my head I started to think about the audio-visual atmosphere and the narrative of the experience wanted to create.
I started to sketch a couple of ideas of potential environment and path possibilities.
I questioned myself if it should be linear or non-linear, is there a right way to navigate or should it be totally free. Should I guide the user, should I restrict it, should I give him some hints?
I reflected a lot on the actual format of this abstract world as well. How is it build? Does it actually mean something?
I decided to create an open world where the user can take the journey it wants without any restrictions. I would just place some objects and animations around this open world. It's his choice to trigger the animations or not. Free from him to interpret whatever he wants from this world and experience.

Here's some process I went through on my sketchbook. 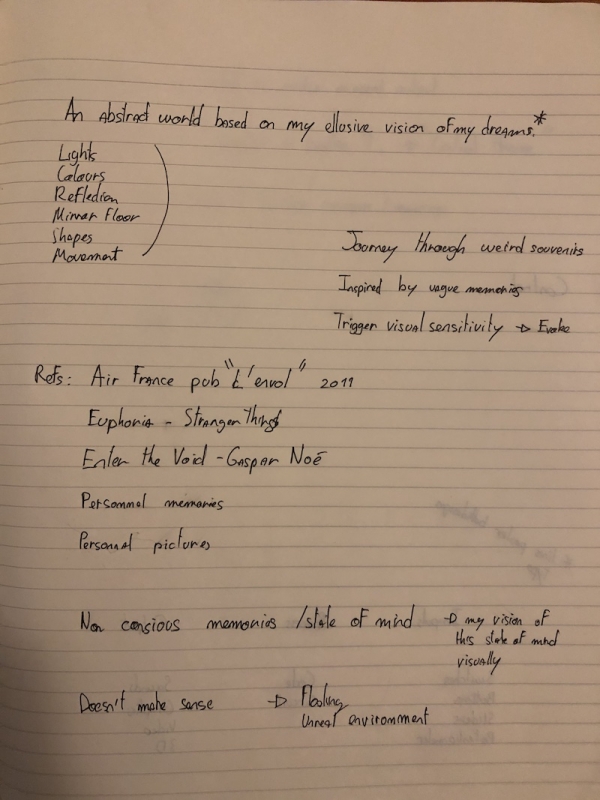 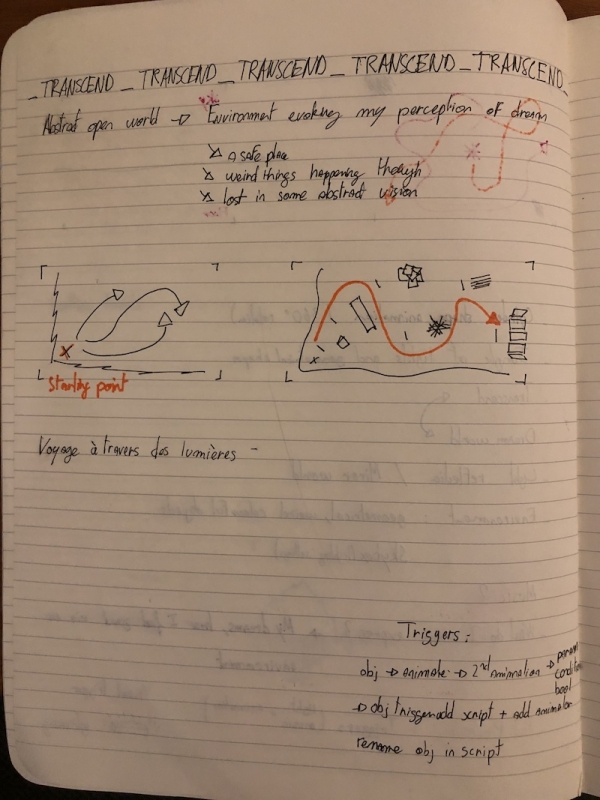 I started week two by creating the reflective floor I wanted and shaping up a terrain made out of this reflective material. After shaping the terrain I started to build abstract objects made out of simple cubes and planes and textured them with light-emitting colors. 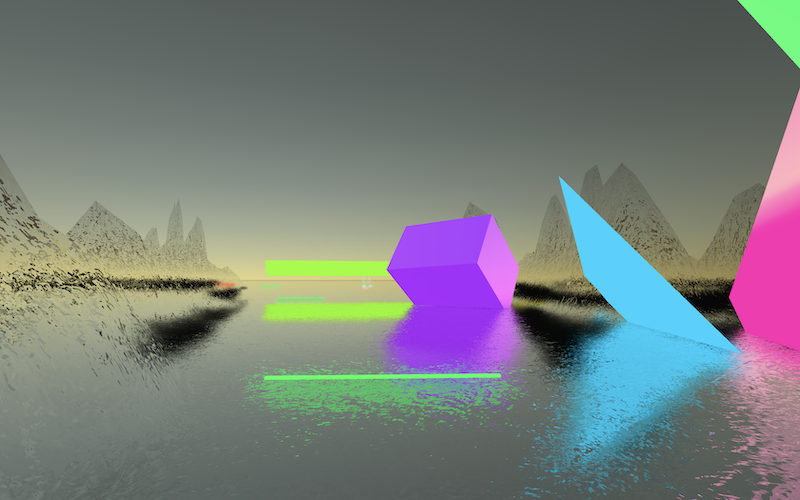 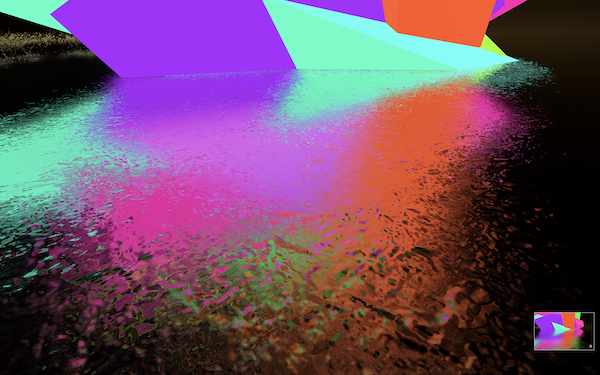 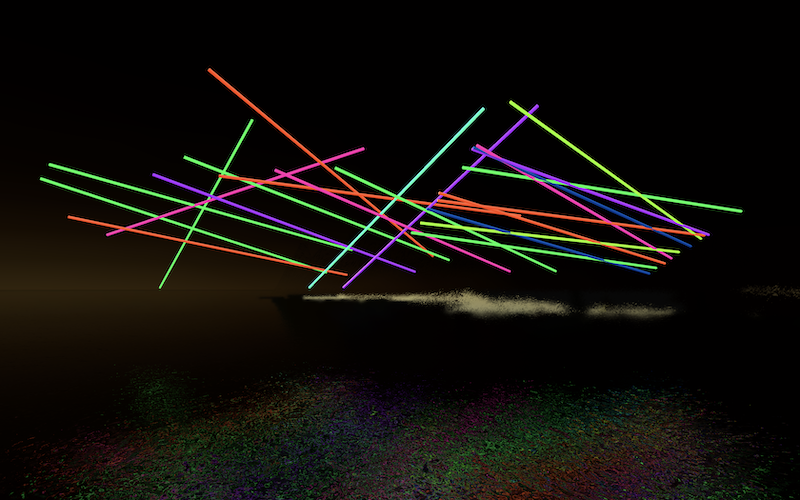 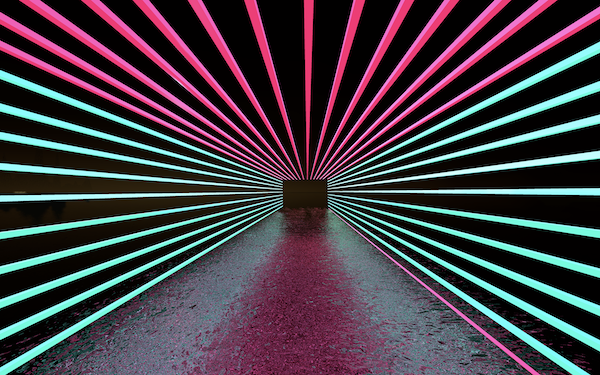 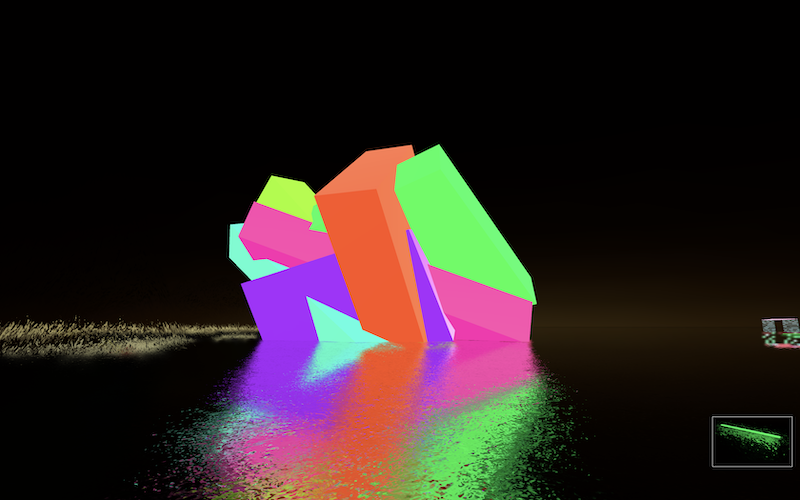 I rapidly build the overall world (which wasn't big as I didn't have much time left) and started to place the objects around. 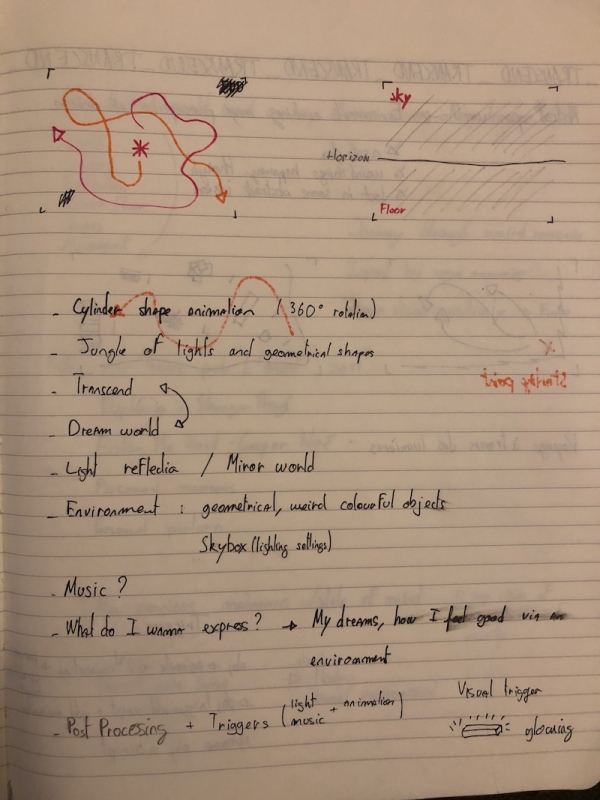 We had our group tutorial on Tuesday morning. I talk through my concept and visual ideas I wanted to go with, with Claire. She gave me some helpful feedback about what I wanted to express with this environment and how I would build my narrative with the controller, how I would suggest the trigger. Afterward, she helped us getting animations working in our Unity scenes. 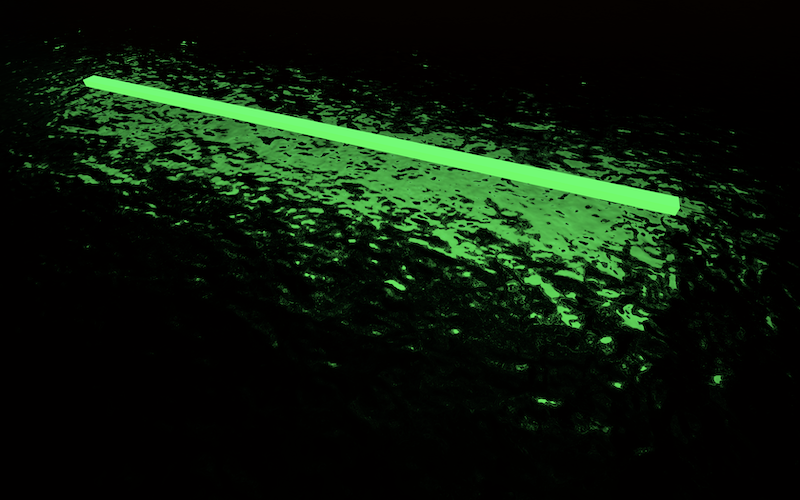 As mentioned before I didn't evaluate the amount of time, I would need to pursue my first idea, but I was a good thing as it made me realize the couple flaws my idea had.

Otherwise, I really struggled with the scripts. I try to figure out alone how to trigger an animation but I quickly understood I didn't have the skills to make this on my own even with forum help (which is very confusing). Claire ran a couple of sessions where she showed us how to make triggers during our studio support hours. It was really helpful. I then managed to trigger all my animations perfectly.

I also had some issues with post-processing. I think I messed up some settings, but as a second thought my scene look right as I wanted without it so I didn't really mind.

The final output is available here.

For this project, I wanted to create an abstract world where the atmosphere makes me feel good. I was really influenced by some of the past events that happened in my life and I wanted to center the attention on how you can create a completely abstract space that makes you feel different kinds of emotions like dreams. In this case, I focused on happiness.

I found the concept of having multiple interpretations of this space very interesting. It all depends on each human's behavior in the space and her/his past experiences in life. Having strong and visually compelling artifact in a space can mean a lot of different things.

Some of my peers tried to wander around the space and their interpretation was very different, supposedly because of their own personalities.

I guess I would obviously make it bigger and stuff the space with more complex artifacts and animations. I would maybe want to create another type of narrative and different path possibilities in this space. Like traveling vertically.

I liked this project a lot mostly because of the infinite possibilities to create any type of experience, even though it might be quite overwhelming at first. I was impressed by the fact we all managed to create really good things in such a short timeframe. It's really motivating me to go further in these types of creations involving 3D etc.