For this project, we had been given an object from our day to day life. A toothbrush. With Lorna and Jingjing we had to re-imagine / re-purpose this object to create a potentially new object or add a sensory response to it. This response should highlight one of our sense.

The first week was kind of dedicated to learning more stuff about makey makey, microbit and doing research for the project. We had a very short project where we had to study an object and make an information strip. It really helped me to strip things down and observe every little interaction possible with this object. I think it is definitely part of the learning process within this project. We also had a field trip to Paisley to explore and observe a sound dome. It was really interesting to see how random objects could be triggered to make a sound response.

We spent the first 2 days looking for ideas and doing some research on potentials interactive outcome with a toothbrush. After watching the references from ECAL and CIID we started drawing a mind map.

We listed all the ideas that we've had. We were developing ideas that were quite ok, but not really unique and interesting. It went for a turntable like an object to a little train made out of toothbrushes.
After spending the first 3 days exploring different paths, I don't really know how but the idea of a wind chime came to me. It popped into my head quite randomly. It's quite hard to explain as there is absolutely no inspiration nor reference for the wind chime idea so I'll call that a happy coincidence?

Everyone in the group was quite happy with this idea so we decided to stick with it. So we decided to transform the toothbrush into a wind chime made of toothbrushes. The idea of having a trigger system each time toothbrushed were in contact was kind of natural, but we didn't know what it should trigger.

I remembered a very interesting work also by ECAL students called "When objects dream". It was kind of the same brief I imagine. They transformed objects and added a sensory response.

After showing this to Lorna and Jingjing they had an idea. Based on the chime, if one of the toothbrushes made contact with another one it will trigger a video of a music instrument playing a sort of chime sound. So like a piano made of toothbrush playing chime sounds/melody. or a violin where the bow is a toothbrush. I think it was quite a good idea but it will be quite hard to get a good 3D model of an actual toothbrush piano. As I quite like challenges I thought I would make the model on Cinema4D. I bought a toothbrush C4D model on the internet and started to create the piano. It was surprisingly simple and fast as C4D has tools that automatically duplicate objects and maps their movement onto a soundtrack.

Here's the composition on C4D and a rendered model

Later in the week, we started to build a prototype with toothbrushes and some piece of foil and cardboard. We attached a small strip of foil to the back of the toothbrush and connected them to some wires. At least 2 wires were connected to the Makey Makey (1 ground, 1 space). Then it simply triggers a video on QuickTime if the space bar is pressed (if ground + space toothbrush were in contact).

One thing that we didn't think about was if the toothbrush sort of "re-touched" the other toothbrush it will stop the video. We didn't really know how to prevent this from happening, so we decided to fake it during the video recording for the assignment.


As shown, the space button was triggered every time the 2 two toothbrushes were in contact. We didn't know how to prevent that.

The second week of project started with tutorials which were again very helpful. We presented our concept to Gillian. We heard her feedback and took it well into consideration. She indeed noticed that our piece was very literal and didn't really understood the translation of the chime into a video. I think as a group we were too focused on the outcome and kind of forgot to take a step back and reconsider our ideas. Stress and deadlines might be a factor as well.

So after the tutorial, we forgot the idea of the video output and focus on a sound response. As we had 4 days until the deadline we wanted to focus on something more achievable.

Focusing on a sound we wanted to create an original sensory response. We first thought it would be interesting to simply have a wind chime but with an unexpected sound like a dog barking or something.
Then Jingjing remembered of a book literally called "book of answers". It is a book where you simply ask yourself a question, open a random page in the book and you get your answer. It's quite absurd in a way but very interesting how it can randomly dictates your mood or choices sometimes.

So we thought it would be very interesting to translate that sort of concept to our wind chime. So instead of triggering a sound, we're triggering answers. So the idea was that the wind chime would speak an answer to a question the "user" would have asked earlier. The user just had to sweep the chime to get an answer. We went from a very literal transformed object to a sort of mystical interactive object.

So after having settled everything in our heads, we started to build a "clean" second prototype. We built a small box out of foam board in order to hide the makey makey and crocodile clips etc.

Then we added more toothbrushes to the chime and stuck foil strips to them. The structure being quite messy with all the cables hanging, we wanted something as simple as possible. We pulled 6 cables out of the foam board box and connected them to 6 toothbrushes. 1toothbrush (which was connected to the ground on the makey makey) was completely cover of foil to facilitate contact with other toothbrushed. (It was a sort representation of the ball on a real wind chime).
The 5 remaining toothbrushes were individually connected to one of the five inputs (space, up, down, left, right).
With this set up we were able to set up a unique answer to each of 5 toothbrushes recreating just like the book a sort of fortune based object.

We started to set up the text to speech tool within scratch to get a customizable answer for each toothbrush. But for the video documentation, we wanted to set up a small echo + distortion. We used Ableton and a few sound effects on 2 recordings.

We also wanted to set up a sort of mystical mood for the video. I took real wind chimes sound recordings and modified it in Ableton adding distortion echoes and stretching it. It ended up in a really nice sound piece that was setting up a mysterious vibe and also slightly reminding the original soundscape of wind chimes.

On Tuesday we started to think about the final installation for our documentation video. As the piece is interactive and needs a "user" we created a small instruction sheet. We added a colored light (just an iPhone) to focus the attention on the toothbrushes. The foil reflecting the blue light gave the piece a very nice and appealing look. 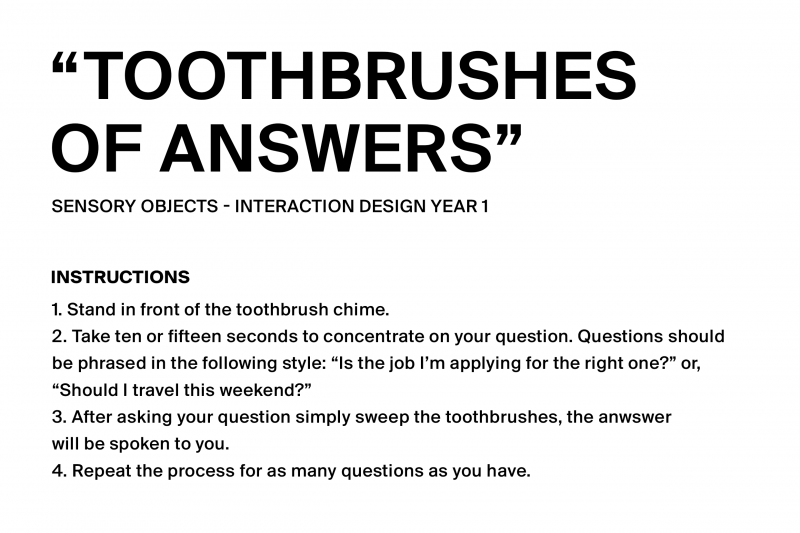 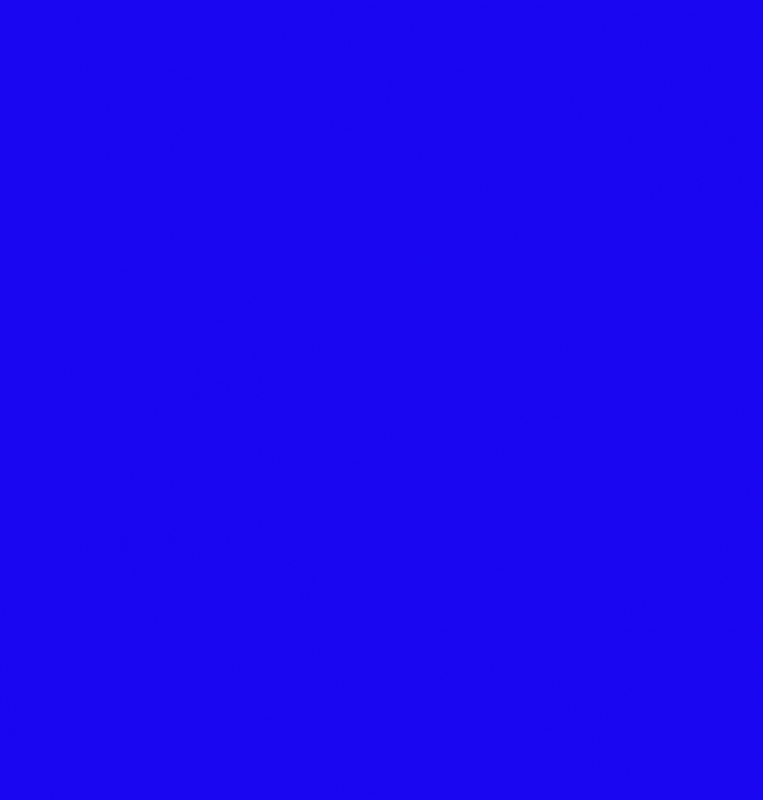 While recording either I or Jing Jing was holding the chime. It wasn't connected to a computer at that time because the setup would have been too messy to hold in the air. So we fake it and added the sound during the editing process.
We tried to set up the scene with wide and close-up shots and then introducing a "user" (Lorna) and showing how it works. As we didn't have a huge space to shoot, we tried to play with perspectives to give the feeling it was alone in a room.

This project forced us to detach our minds from the current postulate of the object's purpose. It was really interesting to think about that. I think we all wanted to create something playful and appealing. We wanted to re-imagine this regular object and transform it into something way more attractive in some way.

Adding interactivity and sound response to it was a challenge. The fact that it was such a regular object was really hard as we had to completely forget its purpose and try to re-invent it. Transform it into another known object or something completely new.

I found the re-purposing process really hard and interesting at the same time. It's hard to detach our minds from the current reality we're living in.

For the kind of mystical part, we wanted to create a sort of mood and experience around our object thanks to some lighting and sound design.

I think a better design, without apparent foil and crocodile clips. A laser-cut plastic box.
I think the aim is to make it more "clean" to get a good focus on this interactive part of the object and not on the little visual default it has, like tape, foil etc.

On the interactive part, I guess it would be nice to have a more "reactive" way to trigger the answer. Maybe a tiny movement sensor?

I think the improvements would be primarily on object design and the installation. I think the concept as it is right now is interesting and playful. I don't really know what we could add or modify in the future.
I think we'll have to focus again on the postulate of the toothbrush being something different than a toothbrush.

I really enjoyed this project. It was nice to be in small groups as we could build things faster and be more ambitious with our ideas. I also liked the fact of having such basic objects that we use on a daily basis. It added a sort of challenge. I think it would also be really interesting if we could do these kinds of projects with product design students maybe? We tend to focus more on the interactive part, which is important, and forget a bit about the product part.
Other than that it was really nice to see everyone's response to the brief. I think we all managed to create some really interesting object from powerful ideas.

Would really work this again in later years!

As we had to hand-over the makey-makey and the cables we transformed our object into an "analog" version. It's available in the studio.